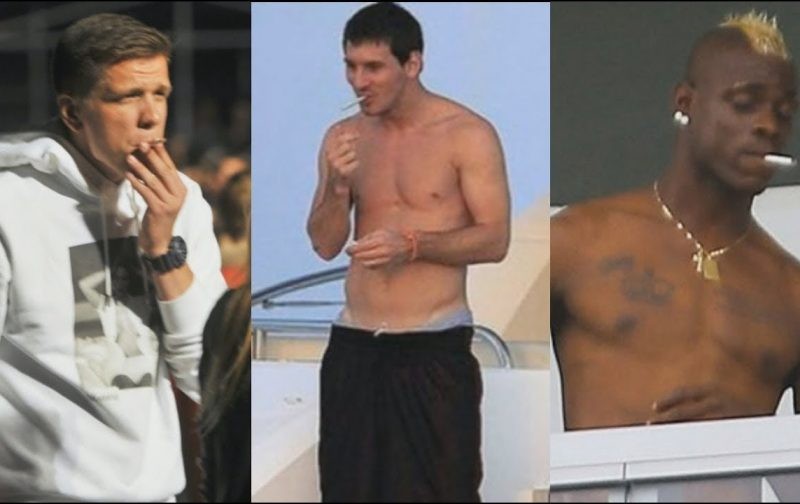 The secret of footballers is constant and hard training plus, a correct balanced diet and healthy lifestyle but the real secret that distinguishes many players seems to be only one, the most unexpected one is smoking.

Over the years, several players have been seen with a cigarette in their mouth when they were outside the playing field. This is an unhealthy habit for a professional athlete but still, there are many players with have maintained their habit despite a brilliant football career. Some of them were seen with a cigar, cigarette, or even loaded e juice and that is why we have made a list of some of the footballers who have got a special love for the puff.

At the age of 42, Gigi is still in great shape. What is his secret? To maintain a healthy lifestyle between violations and illegal gambling, Gigi relaxes by smoking with his wife Ilaria D’Amico. A perfect mix, which has guaranteed 8 long championships and a World Cup for his successful career. And what could be better than celebrating the victory of yet another Italian flag with a nice cigar? Gigi is an example of life.

Here we have another world champion on our list. Mesut Özil was photographed one time or another lying on a luxury yacht, showing off a sublime elegance with a cigarette to his lip. So far, this has not necessarily hurt his career. The German soccer player is one of the most famous players in the world

The pivot of the defense is an absolute certainty. Complete in every technical/tactical aspect, Gerard Piquè best represents the prototype of the modern defender. Just like Gigi and Ozil, this Spanish player loves to celebrate his great victories, a nice Cuban cigar rather than with alcohol (like Massimo Oddo in the World Cup). And who wouldn’t want to enjoy life with some bad habits when you have got Shakira in your life and a successful career.

One of the best strikers ever in the Premier League and currently the highest-paid player in the English league. The historical captain of England has undergone a physical involution in recent years and, at the age of 34, his career now seems to be at sunset but he is a game coach at Derby County. Certainly, his passions for alcohol, parties, and smoking did not help him get up but it doesn’t seem to have really hurt his career either.

Ashley Cole was caught smoking many times during his career. This caused problems, especially under coach Jose Mourinho. Mourinho is known for being completely against smoking for his complete team. He always wants to get the maximum performance out of his players. But Cole’s new life in London made him a free and happy person.

The bad boy par excellence could certainly not be missing. Super Mario does not miss anything. Balotelli has never tried to hide his excesses and has been seen several times in enjoying a cigarette during his “stressful” day. Several trainers have already pointed out that he has to give up smoking if he wants to reach his full potential. He would have changed more brands of cigarettes than football clubs, yet his little movement on the pitch is attributable to his unwillingness to crash more than to damage related to smoking.