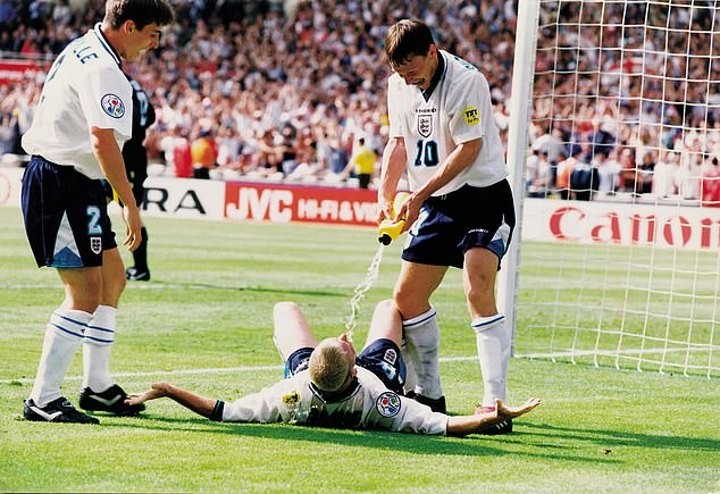 Football stars and supporters have been challenging each other to post their favourite pictures on social media during the unexpected break in the season.

The 2019-20 campaign has been suspended until at least April 30 due to the outbreak of coronavirus, and players and fans have been sharing photos of their sporting memories.

Pictures must be posted without context or description, and Gary Neville, Jamie Carragher and Michael Owen are among those to participate in the Twitter movement.

Neville has chosen a picture of himself celebrating with Paul Gascoigne during England's 2-0 victory over Scotland at the 1996 European Championships.

The group stage match was made memorable by Gascoigne's superb individual goal, followed by the famous dentist's chair celebration.

Elsewhere, Carragher has uploaded a photo of himself in action for Liverpool. The defender can be seen laughing at a naked pitch invader who is being led away by an Anfield steward.

Michael Owen is another former Liverpool player join in. He has selected an image of himself and Steven Gerrard as teenagers at the Reds training ground.

Newcastle midfielder Isaac Hayden has posted a picture of himself celebrating his unlikely winning goal against Chelsea in January.

Emotions were running high at St James' Park after the injury time goal, and the photographer has captures perfectly the moment Matt Ritchie kicked the corner flag at an unsuspecting Magpies fan.

On this occasion, England fans have gladly flouted the rules of the challenge to reflect on another superb moment in sport.