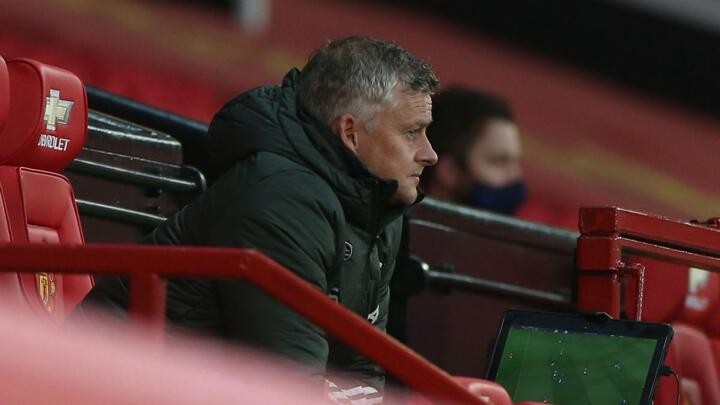 Manchester United's home form is suffering in part because their fans are still not allowed into Old Trafford, says Ole Gunnar Solskjaer.

Ole Gunnar Solskjaer believes Manchester United are missing their fans after continuing their winless run at Old Trafford with a goalless draw against Chelsea.

Following defeats to Crystal Palace and Tottenham, United have now failed to win any of their first three home games in a season for the first time since 1972-73.

Five matches without a home league win stretching back into last season is also United's longest such streak since February 1990.

Victories on the road over Newcastle United and Paris Saint-Germain heading into the contest could not inspire Solskjaer's men to get over the line on home turf, where Chelsea goalkeeper Edouard Mendy made two excellent stops to deny Marcus Rashford.

The United boss felt both sides' exploits in Europe during midweek - Chelsea earned a 0-0 draw against Sevilla in the Champions League - took its toll, but he was fixated on the lack of fans as the behind-closed-doors reality of the coronavirus era continues in the UK.

"Two teams who played in Europe this week, I think it showed in the first half. It was not the greatest," he told Sky Sports.

"I think in the second half we pushed on. If that Stretford End is full we might get some help and get the ball over the line.

"We pegged them back and created some half-decent opportunities. There was a great block by Thiago Silva and the goalkeeper has made a couple of fantastic saves against Marcus.

"All in all, a good defensive performance and we created enough chances to give ourselves a win."

Edinson Cavani - United's oldest Premier League debutant since Zlatan Ibrahimovic in August 2016 - almost scored with his first touch for United after coming off the bench.

But that incident again prompted Solskjaer to speculate over the effect the United fanbase might have had upon an often dour encounter.

"A nice little run towards the near post and a nice little flick. That would have been great for him," he said.

"If we'd had that Stretford End behind the goal it would have created more pressure and more urgency. That lacks, you're watching the game and it's a different sport.

"With the fans here, they help you and we miss them.

"It's the same for all teams but I think everyone agrees that there's a little bit less in football. The edge has gone and I can't wait to get them back."