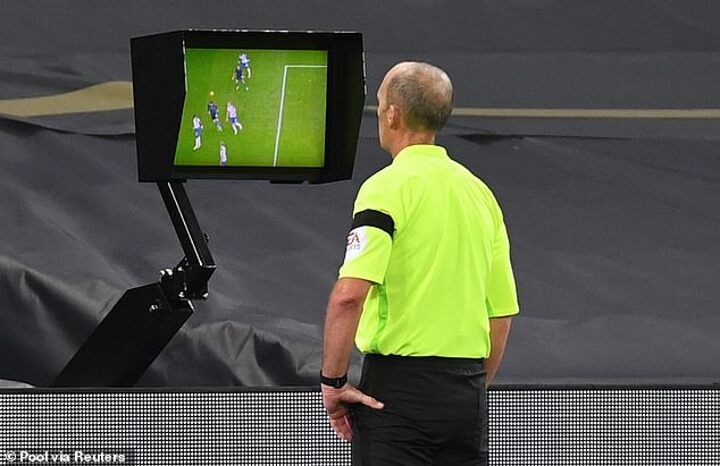 Football's lawmakers have insisted VAR is here to stay and that there would be 'uproar' if the controversial technology was scrapped despite dividing opinion.

The introduction of referees checking their pitchside monitors has failed to assuage frustration from supporters, players and coaches alike over how VAR is used and the interpretation of a series of questionable rules.

David Elleray, the technical director of IFAB, and Lukas Brud, the secretary at the same organisation, spoke to The Times about the future of VAR and defended its much-maligned track record.

The spate in bizarre handball calls and incidents across the pitch that VAR has pounced on has resulted in an unsightly clamour to axe the system again this season, just two years after its introduction.

Former official Elleray and Brud believe the frustration directed at VAR is often misplaced, however, and have pointed to a number of its successes so far.

'I think if there was no VAR in the future there would be uproar,' Elleray said. 'Pre-pandemic, more than 100 countries and competitions were using it or planning to use it, believing the benefits outweigh everything else.

'Ultimately the game is fairer. You won't have a major competition decided by an error, a penalty that should not be awarded, a goal scored with a hand.

'Player behaviour has improved significantly, much less mobbing of referees. There are some very strong figures on that reduction. Simulation is down.

'Some would say VAR broadly has helped to clean up football. There are far fewer red cards for off the ball [incidents], more bad tackles punished, more penalties given - perhaps some a bit harsh.'

VAR was firmly placed under the spotlight again after Aston Villa were denied a stoppage time penalty in their loss to West Ham last week.

Ollie Watkins was hauled back on the edge of the box before netting an apparent leveller, although the check from the officials focused on the striker straying offside, as a result of the push, rather than any potential spot-kick.

The incident, the latest in an ever-increasing series that has mired VAR in mutiny, has sparked fresh uproar from players and pundits - with the interpretation of the sport's guidelines now particularly under fire.

When questioned over the mounting dismay, Elleray refused to comment on any specific moments but criticised the 'rigidness' of some officials.

He added: 'Some leagues around the world, without naming them, the referees are being too rigid and inflexible. This is not what football wants or the law intended.'