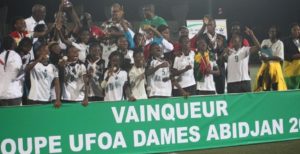 Foreign based players of the female national team, the Black Queen are expected to arrive in the country next week for camping ahead of the Africa Women's Cup of Nations.

The team has been preparing for the tournament at the Ghanaman Soccer Center of Excellence in Pampram after ending a nationwide tour a fortnight ago.

The Black Queens have also been involved in low profile friendlies, however there are plans for an international friendly before the tournament begins next month.

The winner of the tournament together with the second and third place teams will qualify for the Women's World Cup in France next year.