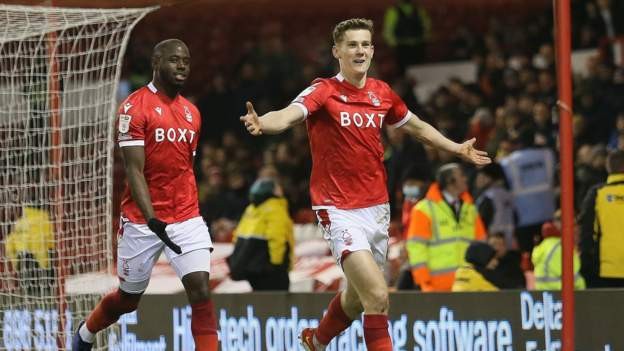 Ryan Yates claimed his third goal of the season against Barnsley

Nottingham Forest chalked up a fourth straight win as they cruised past the Championship's depleted bottom side Barnsley at the City Ground.

Keinan Davis robbed possession from a ponderous Mads Andersen and raced away to slot past Barnsley keeper Brad Collins.

Ryan Yates tapped in Brennan Johnson's cross after neat Forest build-up to make it 2-0 at the break.

A fine driving run from Djed Spence and pullback then teed up Johnson who stroked a finish across Collins and into the far corner to wrap up the win.

Bottom side Barnsley, without a win in 10 league matches, reported just 12 players fit for training on Monday and made the trip to the East Midlands without head coach Poya Asbaghi because of illness.

And they were soon on the defensive as Forest defender Steve Cook headed just wide before Tykes captain Andersen gifted Aston Villa loanee Davis his first goal for Forest.

Callum Styles saw a first-time effort cleared off the line as the Tykes almost levelled, but it was firmly against the run of play.

James Garner skewed a shot just wide and Collins palmed a Yates header over the bar before the midfielder doubled the lead a moment later.

Forest were in cruise control after the break with Spence, a reported January target for Premier League clubs, impressing to set up Johnson's seventh goal of the season and then teeing up Xande Silva whose powerful strike smacked a post.

A sixth win in eight league matches lifts Forest within a point of the play-off places in seventh, while Barnsley remain eight points from safety after a 14th defeat in their last 18 league matches.

Attempt missed. Xande Silva (Nottingham Forest) left footed shot from the left side of the six yard box is too high. Assisted by James Garner with a cross.

James Garner (Nottingham Forest) wins a free kick in the attacking half.

Attempt saved. Steve Cook (Nottingham Forest) header from the centre of the box is saved in the top right corner. Assisted by James Garner with a cross.

Attempt blocked. Scott McKenna (Nottingham Forest) header from the right side of the box is blocked. Assisted by Jack Colback with a cross.

Philip Zinckernagel (Nottingham Forest) wins a free kick in the defensive half.

Xande Silva (Nottingham Forest) hits the right post with a right footed shot from the right side of the box. Assisted by Djed Spence.

Attempt saved. Claudio Gomes (Barnsley) right footed shot from outside the box is saved in the bottom right corner. Assisted by Devante Cole.