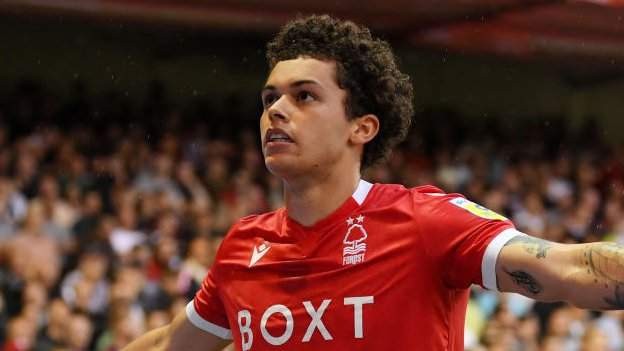 Nottingham Forest and Wales forward Brennan Johnson has signed a new four-year deal with the club.

"Playing for Nottingham Forest in the Premier League was always my dream growing up and now it's going to happen," said Johnson.

"It has been an unbelievable journey from the Academy to the first team. I'm really excited for this new season."

Johnson, whose father David played as a striker for Ipswich Town before a five-year spell at Forest between 2001 and 2006, has been with the club since the age of eight and made his senior debut against West Brom in 2019.

He added: "I want to thank the manager, all the staff and the whole board for believing in me and giving me the confidence to go out on the pitch and show what I can do."

Johnson has played 13 times for Wales and helped them qualify for this year's World Cup in Qatar - the first time Wales have reached a World Cup since 1958.

Forest boss Steve Cooper said: "Brennan was instrumental in our success last year and he's got the potential to make a big impact in our return to the Premier League.

"He's spent his entire footballing life with Nottingham Forest and everyone is very proud at what he's achieved.

"However, at just 21-years-old, his best days are ahead of him and he has a very high ceiling at what he could achieve.

"We're all delighted he has committed himself to Nottingham Forest long-term."