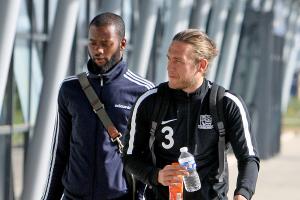 Ansah, 23, was included in manager Phil Brown's 30 players that are currently in Spain for preseason.

The English-born Ghanaian is expected to featured in a couple of games before a decision will be taken on him.

Southend boss Phil Brown is looking forward to Ansah in action as he believes he had a firm foundation at Arsenal but lacked opportunities after leaving.

“Zak’s father’s rang me and asked if there was a possibility of Zak coming away with us,” said Brown.

“I checked his history and he had something like 11 years at Arsenal so he has good grounding.

“He hasn’t had much of an opportunity since leaving Arsenal so we’ll be having a look at him in Spain and then play him in the games we have against Partick Thistle and Ipswich.

Ansah has previously played for Charlton Athletic, Newport County and Plymouth Argyle all on loan.

Zak’s father is considered a Southend United legend having made a total of 181 appearances for the Shrimpers in the 90’s and the striker is hoping to follow suit.