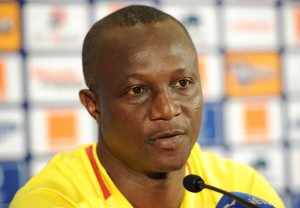 Former Black Stars coach James Akwasi Appiah is in Uganda for the second leg fixture of the CAF Confederations Cup preliminary stage as he guides Al Khartoum Al Watani of Sudan against SC Villa on Saturday.

The ex-Black Stars captain is faced with the tumultuous task of guiding the Sudanes side to qualification after losing the first leg by a lone goal at home to the Ugandans a fortnight ago.

In an interview with Ugandan journalist Cliff, coach Kwesi Appiah expects a tough game on Saturday.

"It's not going to be an easy game. The mere fact that SC Villa came to Khartoum to have a win and they are playing on their home ground with their supporters makes it difficult.

So it's not going to be easy for us but we are going to do our best and give them a good game" Kwesi Appiah said.

The former Ghana gaffer ruled out weather effect on his team going into Saturday's game in Baki, Kampala.

"For me the weather has no effect because the sun is very high in Sudan and for me the weather is really good. I won't say the pictch is the best but it's good" he replied when asked about the weather condition and nature of pitch the game will be honoured.

Kwesi Appiah further admitted his side were unlucky in the first leg encounter which led to their defeat at home.

The opposing team might get only chance and score. That's football for you.

The mere fact they were able to defend the goal they scored means they did really well.

We are here to make sure we put up a good team and same time try to perform at the highest level" he added.

Kwesi is been having a topsy-turvy season in Sudan and will have to secure qualification for Al Khartoum before the media turn against him.