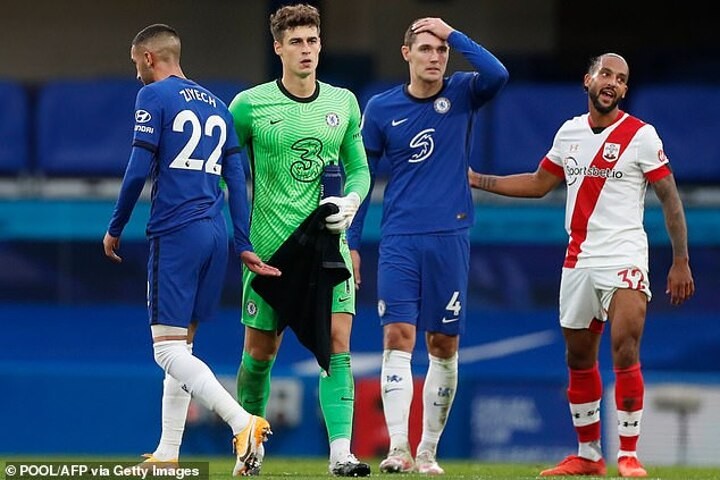 Kepa Arrizabalaga is now Chelsea's third-choice goalkeeper due to his inability to remove errors from his game, claims Tony Cascarino.

The £72million stopper was signed from Athletic Bilbao two years ago and was intended to become the club's long-term No 1.

Initially it looked as though Chelsea had replaced former keeper Thibaut Courtois with someone of similar standing, although there have always been questions asked about the Spain international's ability and character.

Due to Mendy's recent injury he has had to rely on Kepa once more, with the 26-year-old starting in their 3-3 draw with Southampton on Saturday.

It was a poor display at the back from Chelsea as they chucked away a 2-0 and then 3-2 lead to draw with the Saints.

Kepa had another poor afternoon and was at fault for Che Adams' goal after rushing out and failing to claim the ball.

Cascarino who made 40 appearances for Chelsea between 1992-94 believes his latest gaffe will see the Spaniard move down the pecking order at Stamford Bridge.

The former Blues forward told talkSPORT: 'He's gone from No 1 to No 2 goalkeeper, and after (the Southampton) performance he's probably No 3 now.

'He won't even make the bench now as (Willy) Caballero will be No 2.

'I'm a bit surprised (Lampard) chose to play Kepa; he doesn't fancy Kepa and it's obvious.

'Caballero has done very little wrong, but because they've paid such a high fee for a player they need to justify playing him to give him an opportunity to perform.'

Former Manchester City keeper Caballero was Kepa's understudy last season and has proved himself to be adequate back-up, however at the age of 39 he is unlikely to feature regularly for the Blues.

Frank Lampard will be concerned his side's defensive frailties will cost them this season, the draw with Southampton was already the second time in five league fixtures that Chelsea have conceded three goals in a game.