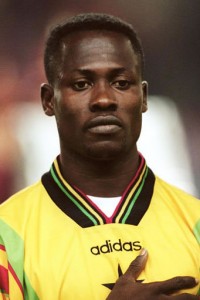 Ex Ghana defender Stephen Baidoo has backed the Ghana FA to do all it can to get Asamoah Gyan rescind his decision to temporarily quit international football.

The 26-year-old in a letter to the Ghana FA on Friday asked to be excused from national team duty for a while without stating any specific reason.

It is however widely believed the excessive vilifications and threats received after missing an early penalty in Ghanaâ€™s 1-0 semi final defeat to eventual winners Zambia was behind his decision.

Gyan was meted similar treatment after his quarter final penalty miss at the 2010 World Cup game against Uruguay.

And Baidoo in solidarity with the Al Ain striker says Gyanâ€™s decision has been in the offing for sometime now with the flow of excess criticisms in the wake of Ghanaâ€™s disappointing Nations Cup campaign.

â€œYou never know what you have until you lose it. I am not happy that that Asamoah Gyan has called it off now.

â€œHe needs to be talked to because we need him and I plead to Ghanaians that we let his name rest.

â€œIf I should play for the nation and I am always getting threats and insults even to my family, certainly I will quit.

â€œAsamoah Gyan has scored so many goals for Ghana in a short time and I think he is the best striker we have now and therefore we should not treat him like that. He doesnâ€™t deserve it.â€