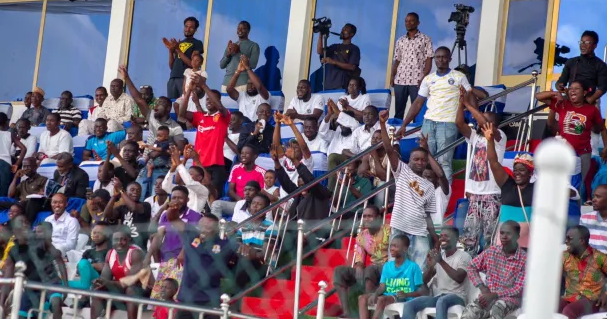 Former Hearts of Oak coach, Samuel Boadu, took advantage of his free time to visit the Abrankese stadium to watch a Division One league game between Nations FC and Swedru All Blacks.

The 38-year-old was sacked by Hearts of Oak after a poor start to the season, ending his two-year stay at the club.

Samuel Boadu won five trophies with Hearts of Oak, including the Ghana Premier League and two FA Cups between 2021 and 2022.

Despite his exploits, the former Medeama SC gaffer was shown the exit after failing to win a game in the new campaign.

Following his departure from the club last week, Samuel Boadu took the chance to watch second-tier football at the refurbished Dr Kwame Kyei Complex in Abrankese.

It is yet to be known if the former Hearts of Oak coach will pick up a job in the topflight league, but for not his sole work will be with the national U20 team.

Meanwhile, the Phobians have appointed David Ocloo as assistant coach while Richard Oppong takes over as goalkeepers trainer.

Hearts are yet to replace Samuel Boadu.