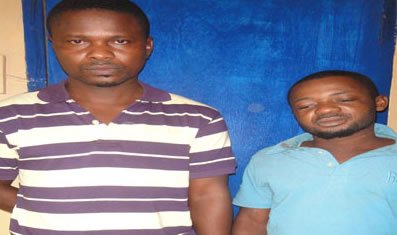 A former Accra Hearts Of Oak player, 26-year-old Moses Andoh, has been arrested together with one Alhassan Suleiman aka Prince Amankwah, for allegedly defrauding an IT technician to the tune ofÂ  ?50,000 under the pretext of securing her a USA visa.

They are currently in the custody of the Odorkor police assisting with investigations.

The complainant, who is a laboratory technician, resides at Dunkwa-on- Offin while the suspects live at Kasoa in the Central Region.

The victim, with the intention of travelling outÂ­side the country, was purportedly introduced to Suleiman by one Nyametse as a travel and tour agent who could help her secure a visa, according to the police officer.

He said on March 20, 2015, Suleiman invited the victim and Nyametse to meet him (Suleiman) at Kasoa for a discussion on the cost involved.

Together with Moses Andoh, who also introduced himself as a military officer, the two allegedly charged the victim ?50,000 as the cost involved and therefore asked the lady to pay ? l0,000 for the start of the processing, which she did.

The two reportedly promised the victim that the visa would be ready in three days' time.

On the third day when the complainant contacted Suleiman, he told her to bring along the balance of ? 40,000 before she would be given her passÂ­port with the visa on April 7, 2015.

On the said date, the victim met Suleiman and Moses at her bank where she had gone to withdraw the money and after some chats, they asked her to wait while they got her the passport with the visa.

Both men then got on board a waiting taxi and bolted.

After the complainant had waited for about five hours and was not hearing from them, she decided to call their numbers but their phones head been switched off.

The victim suspected that she had been swindled and immediately reported the matter to the police.

Police investigations led to the arrest of the suspects at Kasoa on April 13, 2015.

During investigations, it came to light that immediately they had succeeded in collecting the money from the victim, Suleiman deposited an amount of ? 26,400 into his bank account but later went to withdraw about ? l0.897.00 leaving a balance of ? 5, 503.00 in his account.

Upon interrogation, he admitted the offence in his caution statement, adding that he gave an amount of ? 7, 500 to Moses Andoh.

Investigations also revealed that Moses Andoh used part of his money to purchase one 46-inch used Samsung television set at a cost of ? l, 330.00 and one Elbee Voltage RegulaÂ­tor the following day.

He also deposited the rest of the money into his Ecobank Account.

The items have all been seized and their accounts frozen, pending investigations by the police.