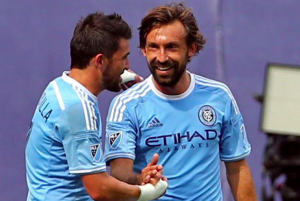 Midfield maestro Andrea Pirlo is relishing his time in America with New York City FC and is considering extending his stay in the country once he decides to hang up his boots.

The World Cup winner revealed that he prefers life in the United States compared to Italy, as he doesn’t have to worry about his own safety.

“I will not rule out the possibility of staying here [past retirement], it might be interesting,” the former Juventus man told the New York Times.

“I always wanted to play in America, but I never imagined that I would come here so soon.

“Here, I can dine in the most fashionable of restaurants, whilst in Italy I could not.

“There were even times when we were kept in our locker room until late in the evening, because it was not safe to go home.”

Since having traded life in the peninsula for that in the Big Apple, Pirlo has managed 13 appearances, whilst bagging two assists.