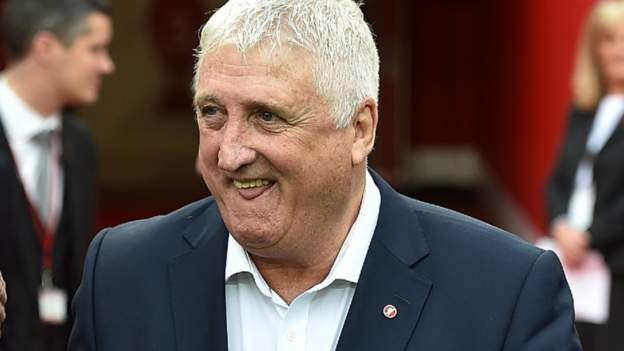 Former England striker David Johnson, the first man to score for both Liverpool and Everton in the Merseyside derby, has died aged 71.

Johnson, who scored six goals in eight appearances for England, had been suffering from throat cancer.

He had two spells at Everton in between playing for Ipswich Town under Bobby Robson and Liverpool for Bob Paisley.

In six years at Anfield from 1976 Johnson won three league titles and the 1981 European Cup.

Ex-Liverpool forward David Fairclough led the tributes to his former team-mate, writing on Twitter: "So sad to hear my great friend and Liverpool legend David Johnson has passed away today.

"Shared so many great moments and memories with 'Jono'. Today is a very sad day. Condolences to all Dave's family. RIP 'Doc'."

Everton confirmed the news with a statement that read: "Everyone at Everton football club is saddened to learn of the untimely passing of David 'Doc' Johnson at the age of 71. Our thoughts are with David's family and friends at this time."

Johnson began his career at Goodison Park and scored in the Merseyside derby in 1971 - then netted for Liverpool in the match nine years later. Only Peter Beardsley has since repeated the feat.

He moved to Ipswich in 1972, helping Robson's side win the 1973 Texaco Cup - a competition for club sides in England, Scotland and Ireland - and reach the quarter-finals of the Uefa Cup the following season.

Liverpool-born Johnson made his England debut under Don Revie in 1975, scoring twice in a 2-2 draw against Wales at Wembley.

Johnson started the European Cup final against Real Madrid in 1981 but Ian Rush's emergence the following season saw him spend time on the bench and he re-signed for Everton in August 1982.

He signed for Barnsley in 1984 and also played for Manchester City, American side Tulsa Roughnecks and Preston North End as well as having a spell as player-manager at Barrow before retiring in 1986.

MOTD Top 10 World Cup 2022: The most controversial moments rankedFrom old pick-ups to the fastest car on the planet: Top Gear tests a full range of vehicles