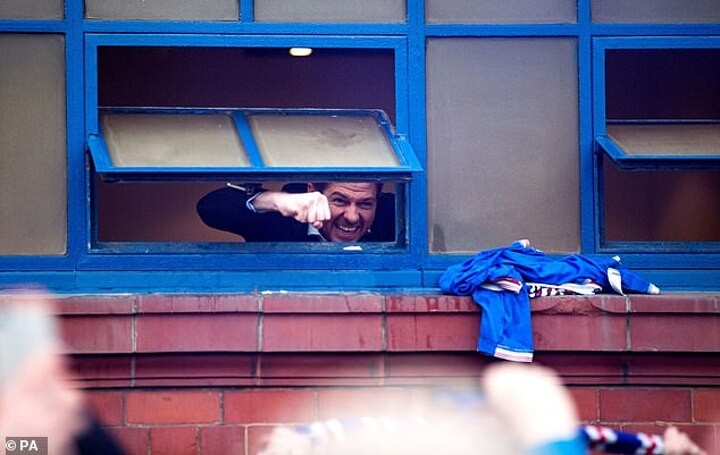 Dave King believes there is zero chance of Steven Gerrard leaving Rangers for Liverpool in the wake of his Premiership title triumph.

Gerrard’s success is being closely followed at Anfield, where he gained legendary status during a 17-year playing career.

Speculation about a potential Merseyside return has been heightened recently by the English champions’ collapse in form and suggestions that Germany could be interested in landing Jurgen Klopp after this summer’s Euro finals.

King, however, is supremely confident that the Ibrox manager will remain in place next season to spearhead a bid for Champions League qualification.

The former Rangers chairman appointed Gerrard in 2018 and was still in situ when he later extended his contract until 2024.

‘I think there’s a zero-per-cent chance of Steven going to Liverpool in the near future,’ said King, who stepped down as chairman 12 months ago.

‘I say that for two reasons. Liverpool — as a club — don’t abandon their managers very easily. Klopp has done a fantastic job, they’ve had a difficult season, but he is still a great manager and I think he’ll still be there next season, continuing to be successful.

‘Secondly, Steven is not the type of man to break a contract. Steven extended his contract with Rangers full in the knowledge that it would require winning a title and then defending that title.

‘Getting into the Champions League was another obvious target.

‘From Steven’s point of view, spending the next few years at Rangers is going to be good for him, his career and, of course, it will be good for Rangers.

‘A move to Liverpool is somewhere down the road and why would Steven want to go to another club?

‘He loves the club, the fans love him and he has the full support and backing of the board.

‘He has a big task ahead of him, defending the league title will be important. It’s important the fans enjoy this moment because it’s been a long time coming.’

King also claimed the championship, sealed by Celtic’s failure to win at Tannadice yesterday, was the most crucial in Rangers’ history.

‘Over the last number of weeks, even as far as the last couple of months, there was a noise level coming out where Rangers can’t lose it from here,’ he told The Essential Scottish Football podcast. ‘My view was it’s not over until it’s over and the manager and I discussed that. The other thing for me is this league is just so important.

‘It’s number 55, so you would think it’s one of many and it kind of gets lost in that. But this is, to me, by far the most important title Rangers have ever won.

‘Just the idea that somehow that could slip from our grasp in some way kept me on tenterhooks. It was such a relief when we finally got across the line.’

King spearheaded boardroom change in 2015 and reflected on that as he elaborated on why he thought this title was so important, adding: ‘I think in the sense that if you look at the club, that’s been going for 150 years, I don’t think there’s ever been a time where the level of desperation was such that you thought it might never come back from it.

‘I was a kid growing up in Glasgow when Celtic were doing their nine in a row, and Celtic had this kind of invincible team.

‘When you think back now on the players they had, when they’re going six, seven, it kind of seems that you can’t understand where the next title will come from.

‘You know, somehow, it would turn around and Rangers will get back there.

‘The same with when Rangers were doing nine in a row.

‘This one was different. When I got involved in the club again, it wasn’t a normal situation where we were waiting for some change in fortune where Rangers have a run, Celtic have a run. The club was in bad shape.