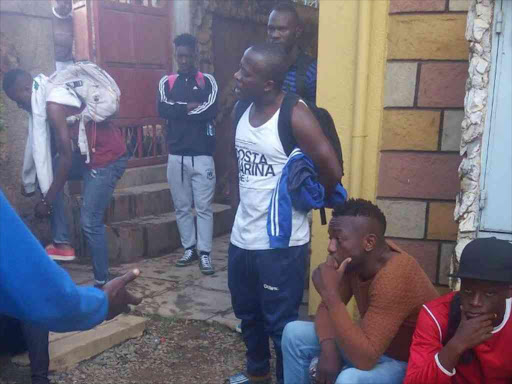 Four Ghanaian players are stranded in Zimbabwe after they were swindled by a football Agent.

The players, Francis Adjetey (23), Peter Tibila (24), John Adu Poku (22) and Nelson Adenyo (23) were swindled by a Cameroonian man masquerading as an agent, who had promised them of a good offer at a ghost club named Khaya Africa Football Club.

According to the fake agent, the so called outfit would pay them signing on fees of up to $US10 000 each plus winning bonuses of US$2000, only for the four to realize upon arrival that the team doesn’t even exist.

The players are currently confined in the Makondo area of Tshovani high-density suburb in Chiredzi.

Speaking to the media about what transpired, 23-year old Francis Adjetey shared his experience on what he thought was a dream but has turned to a nightmare.

Four Ghanaian soccer players were reportedly swindled by a Cameroonian man masquerading as an agent and are still stuck in the sugar producing town of Chiredzi amid the extended lockdown.

“When we arrived in Zimbabwe, we discovered that there was no such team as Khaya Africa FC. After we touched down at the airport we met Gomba and Energy Zava and we were told that we should imme- diately pay US$250 each for logistics which included work permits. They managed to collect a total of US$800 from all of us,” he told  NewsDay.

“They went on to tell us that we are going to a nice club house with free WiFi. They bought us soft drinks and chips. That was all we got for that day. What surprised us was that they were stopping to buy beer at every bottle store along the way until we got to Chiredzi.

"We were taken to a local lodge where we were left for the night with- out food despite our pleas, only for them to come back at about mid- day the following day.”

“We want the whole world to know that these guys are just conmen. The authorities should investigate this issue because I feel there is an element of human trafficking. We are the third batch of Ghanaian players who went through this kind of ordeal and some have since returned home.

"Only a few are here. One is playing for Green Fuel FC while the other is at Chiredzi Stars FC,” said Adjetey.