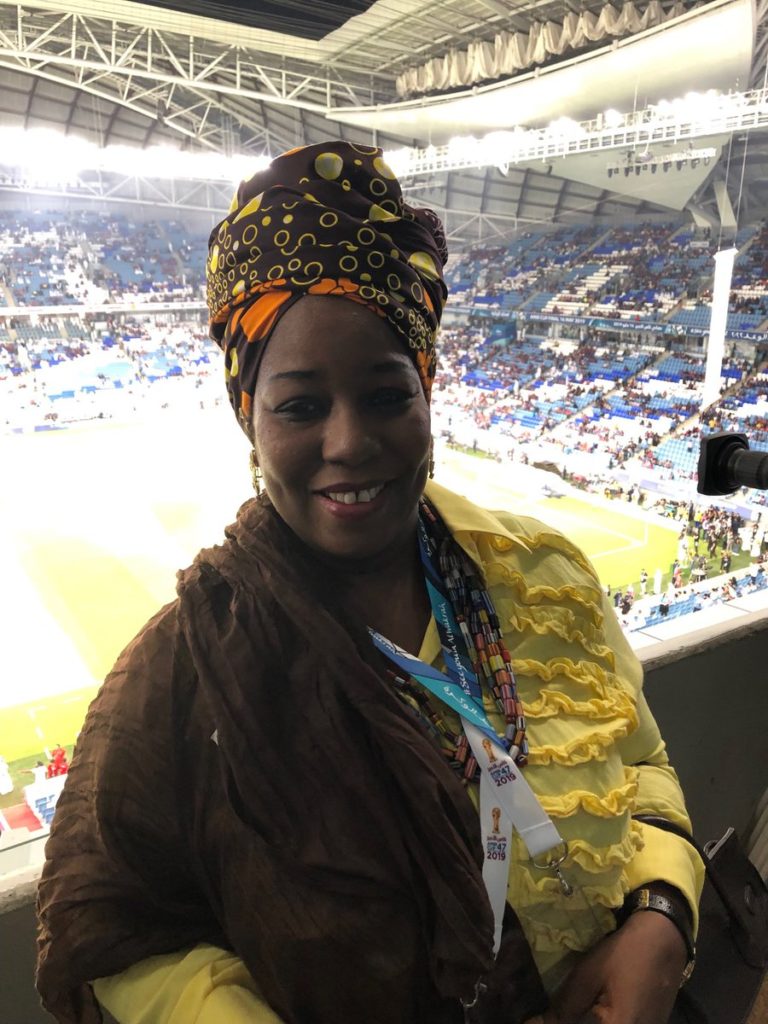 Foussena Leila Djagba has been involved in sports for years years. She delights in many areas especially in sports promotions and entertainment. The well celebrated CAF Awards night was her baby. She has managed sports stars and mentored broadcast journalists. She was at the final of this year’s Amir Cup in Qatar and bared her mind on the 2022 World Cup and more. She spoke before Fifa scraped the idea to expand the 2022 World Cup to 48 teams.

Asked how she got to the level she is now in sports she spoke this way:

''I’m a poor humble lady from Togo who has a vision of being a promoter of African arts, music, culture and sports. ‘I spent my childhood in Togo and my adult and working years in Accra, Ghana. As I move one step forward in my career, other doors opened for me, in many African countries , particularly in South Africa and Nigeria , and I’m grateful to the almighty God. I’m into marketing, public relation, promotions and advertising. Currently, I’m a Managing Director of Zsports International, a soccer consortium based in Accra with office in Lagos, Nigeria.

''I was the Africa manager of Emmanuel Sheyi Adebayor a former Arsenal, Man City, Tottenham striker. I was a former West Africa Operations Director of African Soccer Television, a TV production house based in South Africa and a co-concept originator of CAF Awards for 10 years.

''A former General Manager of Global Media Alliance for Ghana and francophone Africa. Global Media Alliance is the concept originator for the CNN AFRICAN Journalists Awards. GMA is a South Africa based programme development, marketing consulting and distribution company. I’m the founder and CEO of FOUSS PROMOTIONS.

''I have attended three FIFA World Cups: Germany 2006, South Africa 2010 and Brazil 2014. As the concept originator of CAF Awards I MCed the event three times consecutively in South Africa and attended the remaining ones till date. I attended several CAF and FIFA congresses . I witnessed also three Emir cup finals in Qatar and FIFA international friendly match (Spain vs Argentina) , all in Doha.''

Since 2010 you have been paying visits to Qatar as a journalist , to assess the progress made towards hosting the 2022 FIFA World Cup. This month, in June, you attended the Amir Cup Final , what is your verdict on Qatar’s preparedness? I have noticed incremental jumps in infrastructure development, social and labor related matters and transportation. In terms of infrastructure, more hotel facilities have been put up in anticipation of the huge influx of spectators from around the globe.

First class roads have also been constructed, easing the flow of traffic. A newly build airport with ultra modern facilities . Coming to the social and labor related matters I must say there is a tremendous improvement in the conditions of migrant workers in Qatar.

''All countries of origin must also ban recruitment fees and rigorously enforce the ban. This is a positive step as part of the ongoing labour reforms in Qatar ». What do you think about FIFA’s plan to expand the number of teams and the nations that will host the 2022 FIFA World Cup? I must say the situation is too complex and complicated. To be fair to both sides ,FIFA on one hand, needs more money to advance and promote the beautiful game on all levels and in all regions. Consequently, more teams and more host nations translate into more money. On the other hand, the politics of the region is fraught with hostility against Qatar. I do understand FIFA’s point in terms of having 48 teams, it means more money for them which will trickle down to football associations at the grassroots level but in the case of Qatar, the situation seems complicated with three countries in the gulf boycotting Qatar or imposing a land- air blockade on Qatar, it’s not easy at all for free movement of ordinary people. At the last Asian cup in United Arab Emirates, fans and media from Qatar could not travel down to UAE to watch their team because of the blockade, so is tough.

As you know for the last two years Qataris could not travel down to Saudi Arabia for their Hajj or Umra ( Lesser Haj) because of this problem . Religion which is the heart and soul of the Moslem world could not unite Saudi Arabia and Qatar. If it couldn’t bring this people together it’s futile to expect football to succeed where religion could not achieve.

Now with these issues at hand, Saudi Arabia, UAE and Bahrain can not be considered as potential host for 2022, We understand from the media that Oman is not keen hosting 2022 WC games . We have now only Kuwait left in the race . One thing for Kuwait , hosting 2022 could complicate their relationship with their neighbour, Saudi Arabia . Knowing that Kuwait also had suffered seriously in the hands of Saudi Arabia who imposed a blockade against Kuwait which lasted 14 years from 1923 to 1937 . It was not a joke . So Fifa giving matches to Kuwait will create another huge animosity.

I think for now , it’s better to keep 32 teams. How do you think Qatar can improve or establish international relationships with other countries especially Africa?

Not only about football players or officials but hundreds of supporters across the continent will troop in during that time. It’s therefore important for the host country to get to know a little about the African continent. From culture, cuisine, music, arts and literature. What are some of the challenges that you identify so far? :In any human undertaking there are bound to be flaws. In the case of Qatar the project is gargantuan but the short fall I observed was minimal.

Was privileged, last week , to witness the Emir final cup at the newly commissioned stadium, Al Wakrah ,and what I observed from the mixed zone to the media center (which is 6 floors apart), was that the lift is insufficient ; though it was a great inconvenience ,it can easily be addressed before commencement of the FIFA World Cup 2022. The Qatar Airways is not yet covering the entire continent, hopefully it will before the kick off.