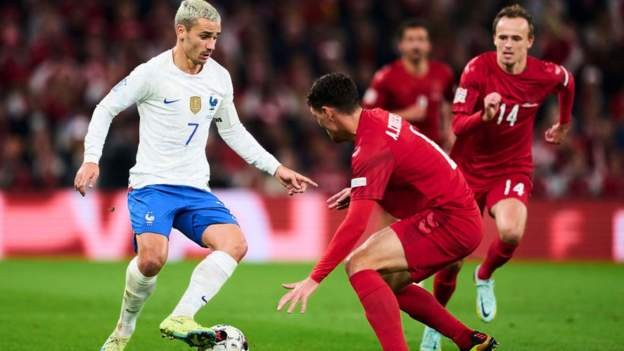 France are hoping to avoid a third defeat by Denmark in the same year and secure qualification with a group game to spare at the World Cup.

Didier Deschamps' side are top of Group D and will progress to the last 16 with victory on Saturday (16:00 GMT).

The past two meetings between the sides in the Uefa Nations League in 2022, have been won by Denmark, with France conceding two goals in both matches.

"They are underestimated as a team," said Deschamps.

"We are talking about a four-month period where they beat us twice and made life very difficult for us. We will have to make sure that's not the case [on Saturday].

"It is not a question of revenge because we know the Danish players and they know us. They can change system from one match to the other and that can give us different types of difficulties."

France captain and goalkeeper Hugo Lloris said the World Cup in Qatar was "a different competition", but added that previous defeats show the strengths of Denmark.

The defending world champions have never lost to a team three times in the same year, but Lloris warned that Denmark are "capable of beating the best".

"It gives you an idea of the level of this Danish team. It's a wake-up for us. We don't need any extra motivation. We are fully aware of the importance.

Bayern Munich defender Lucas Hernandez suffered an anterior cruciate ligament injury in the victory over Australia on Tuesday and is out of the rest of the World Cup.

His brother, Theo Hernandez, is expected to replace him, while Manchester United centre-back Raphael Varane is fit to start.

Denmark midfielder Thomas Delaney has been ruled out of the tournament with a knee injury sustained in the goalless draw with Tunisia.

This will be the fourth meeting between France and Denmark at the World Cup, all in the group stage of the competition. France have gone on to win the tournament on two of the previous occasions they've faced Denmark (1998 and 2018).France have won their past five World Cup games; they have never won six in a row at the finals, with the last nation to do so being Spain in 2010.Each of Denmark's past four World Cup games have been drawn.