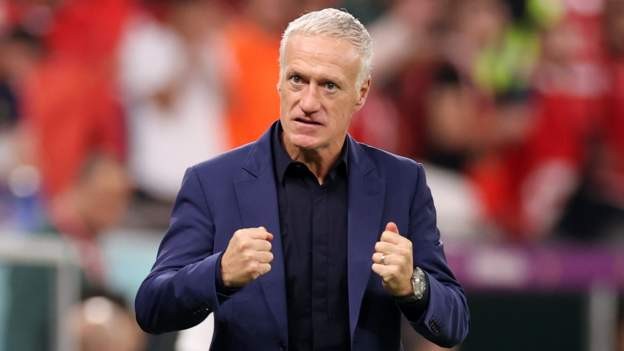 France manager Didier Deschamps says the World Cup holders must "respect what Poland do" before the two nations meet in the last 16 in Qatar on Sunday.

The 2018 winners are the first reigning champions to reach the knockout stage at a World Cup since Brazil in 2006.

They sealed qualification with a game to spare before a surprise 1-0 loss to Tunisia in their final group game.

"Today, even a great nation, if she is not ready, can have unpleasant situations," Deschamps warned.

Poland finished ahead of Mexico on goal difference as they progressed from Group C as runners-up to Argentina, to whom they lost 2-0 in their final group fixture.

Discussing Czeslaw Michniewicz's side, Deschamps added: "All the games are difficult, all the teams are good and prepared. The players all play in good leagues.

"This team has had to defend in the first three games, defend a lot and they defend very well. They love it.

"They have a hardcore of players with good experience. You have to respect what this team does, they deserve to be there."

Michniewicz is hoping Poland, in the second round for the first time in 36 years, can improve service to star striker Robert Lewandowski after he was unable to have an influence in their last outing.

"We played difficult passes in easy situations, we didn't create enough opportunities for Robert. Strikers like that, they need to be near the penalty box," the Poland boss said.

"In order to take advantage of every team we need to bring the strikers to the right zone. You can't normally score from your own half."

Based on what I've seen of them so far, if Poland get in the France half, they will be lucky. They just don't seem able to get the ball up the pitch to Robert Lewandowski, who is so isolated.

The Poles are big and slow and I think they were lucky to get out of Group C.

France can chuck in a poor performance every so often and I know this has been a World Cup of shocks so I am asking to get egg on my face... but I only see this going one way.

This will be the second meeting between France and Poland at the World Cup and first since their third-place play-off match in the 1982 tournament - a 3-2 win for Poland.France are unbeaten in their last seven meetings with Poland in all competitions (W3 D4), with their last defeat coming in a friendly in August 1982 (0-4). Since the last 16 stage was introduced in 1986, France have appeared at this stage five times and progressed on every occasion in 1986, 1998, 2006, 2014 and 2018. This will be Poland's first match in the knockout stage of a World Cup since 1986, when they lost 4-0 to Brazil in the round of 16.Poland are facing the reigning champions at a World Cup for the third time, having avoided defeat in their previous two such games.