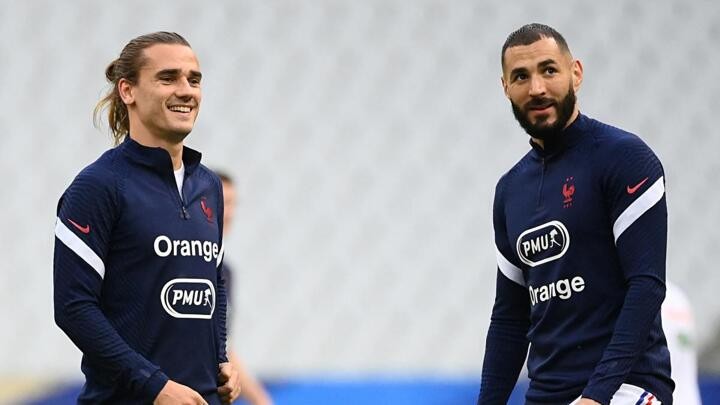 Antoine Griezmann and Karim Benzema sustained knocks against Bulgaria but both players are fit to feature against Germany on Tuesday.

Didier Deschamps has confirmed Antoine Griezmann and Karim Benzema are fit to play a part in France's Euro 2020 opener against Germany.

Griezmann sustained a calf injury in France's 3-0 win over Bulgaria on Tuesday in their final warm-up match and Benzema left the pitch before half-time with a dead leg.

However, both players took part in full training on Saturday and Deschamps expects to have a fully-fit squad to choose from at the Allianz Arena on Tuesday.

Asked if Griezmann and Benzema will be available against Germany, Deschamps told TF1: "Yes, it looks like it. Everyone took part in yesterday's training session.

"We have two sessions left before the game and there shouldn't be any problems."

Griezmann's return to fitness is a big boost for France, with the Barcelona forward having scored more goals against Germany (four) with France than against any other team.

He has also been directly involved in more goals (14) than any other European player over the past two major tournaments – 10 goals and four assists in 14 games at Euro 2016 and the World Cup in 2018.

Benzema was not involved in either tournament for Les Blues after being exiled from the national team for nearly six years prior to his surprise recall last month.

The Real Madrid striker made his first appearance for the world champions in five years and 237 days in the recent 3-0 friendly win against Wales, a game in which he missed a penalty.

That was Benzema's third penalty miss in a row for his national side, having also failed to convert against Switzerland and Sweden in 2014, and he only lasted 41 minutes before limping off against Bulgaria.

But Benzema is now expected to start against Germany in Tuesday's huge Group F clash in Bavaria.

"If I resumed training with the squad yesterday it means I've got nothing amiss, no pain," he told TF1.

"Physically I feel good as I was training indoors, so I'm 100 per cent."

France and Germany have met on five previous occasions at major tournaments, winning two matches apiece and drawing the other.