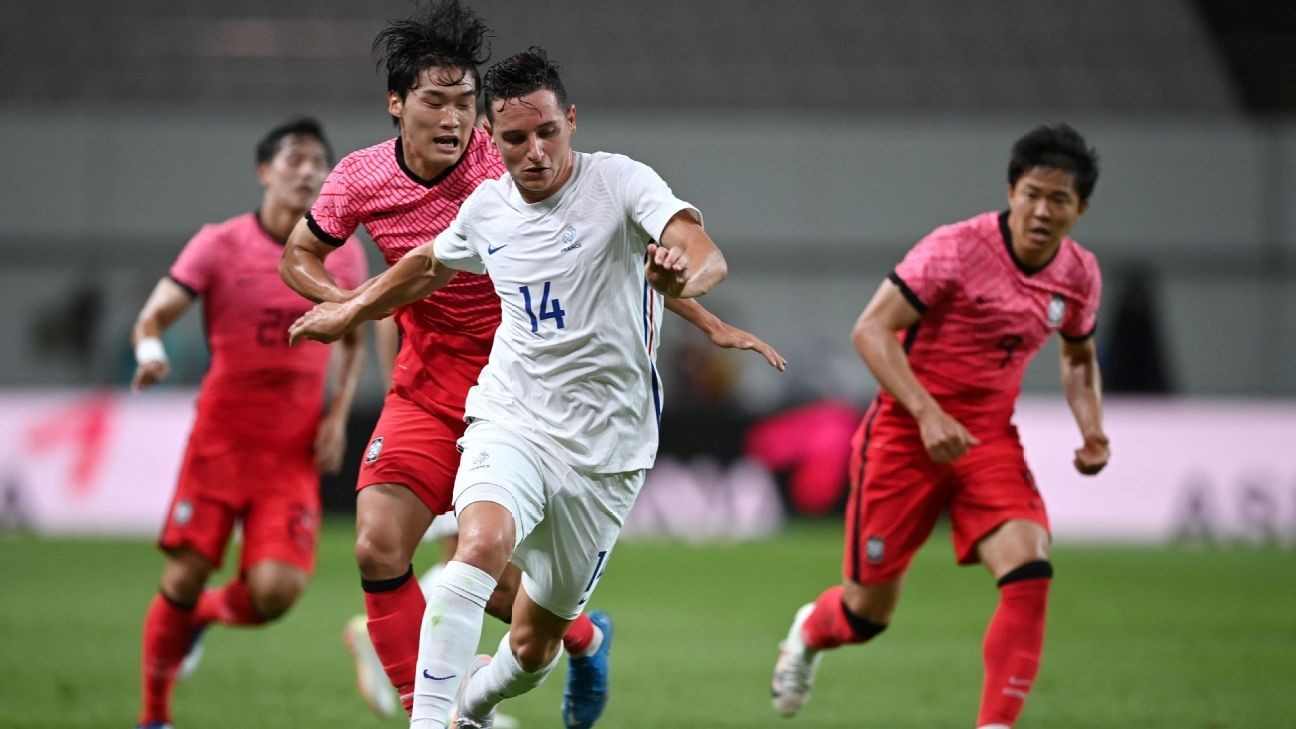 France had wanted to showcase the best players it could for the male team's first appearance at the Olympic Games since 1996. France U21 head coach Sylvain Ripoll, who is in charge of the men's Olympic team, dreamed of bringing the likes of Kylian Mbappe, Eduardo Camavinga, Houssem Aouar and Amine Gouiri to Japan this summer.

Instead, with Europe's top clubs refusing to let their best players go after Euro 2020 and before the new season starts in less than a month, Ripoll's squad was built at the last minute. Les Bleus will head to the Games to face Mexico, South Africa and hosts Japan in the group stage with no Mbappe, no superstars and a host of unfamiliar faces.

Montpellier midfielder Teji Savanier was camping with his friends in the south of France, drinking an aperitif, when his phone rang. It was Ripoll on the line.

Reinier, Diallo and Cucurella and among men's U23 Olympic stars to watch1dTor-Kristian KarlsenMbappe's underwhelming Euro 2020 will drive him to improve21dJulien LaurensFrance's shocking Euro loss to Switzerland falls on manager Deschamps23dJulien Laurens

"I was very happy but I was surprised to hear him. I didn't expect it at all. I didn't think I would be playing in the Olympic Games with France one day," Savanier explained to ESPN during a news conference last week. For him, maybe more than others, it is a dream come true.

Savanier, who will turn 30 in December, is one of the most gifted players in Ligue 1. A genius on the ball, the midfielder doesn't get enough recognition for his talent because he has always considered football a game and not a job. He has never been particularly ambitious or driven; he eats what he wants, lives how he wants and has, for example, always played for a club near home even if it meant dropping into the lower divisions (Arles, Nimes and Montpellier.) Indeed, he still lives with his whole family in the council estate where he grew up in Montpellier.

He is the most normal footballer you could ever meet, but Savanier will now get a chance to play for his country in a big tournament.

With the men's Olympic tournament requiring players to be under the age of 23, with the exception of three over-age participants, Ripoll picked Savanier alongside two stars now plying their trade in Liga MX. Florian Thauvin, 28, won the 2018 World Cup with France but has not played for his country since 2019, while the 35-year-old striker Andre-Pierre Gignac was part of the team that lost the Euro 2016 final to Portugal in his last cap.

"Thank God for Tigres! We don't know what we would have done without them," a source within the France camp told ESPN. The Mexican club were happy to let their players go, despite the Liga MX Apertura starting on July 22.

Gignac has been immense since moving from Marseille in 2015, scoring 149 goals in 261 games and helping Tigres win three Apertura titles, one Clausura, three Campeon de Campeones trophies and the 2020 CONCACAF Champions League. Skilful winger Thauvin joined him on a free transfer when his Marseille contract expired at the end of last season and is hoping to have a similar impact. Playing at the Olympic Games was too good of an opportunity to turn down, but coincidentally, France's first game on July 22 will be against Mexico.

The rest of the France squad is filled with interesting stories, characters and, most importantly, talent. There may not be wall-to-wall superstars but the national shirt will mean so much to a lot of these players.

Take Enzo Le Fee, for example. The Lorient midfielder, 21, is full of promise but has had a tough upbringing. His dad Jeremy Lampriere was incarcerated for most of his life for violence, drugs and possession of a gun. Enzo used to miss training sessions to go and visit Lampriere in jail, while he was brought up by his mom and grandmother -- in her house because his mom could not afford her own place -- and once he signed his first professional contract, he bought everyone a big house. But last April, his father, just out of jail, tragically killed himself aged 41.

Hertha Berlin's defensive midfielder Lucas Tousart, 24, and Angers goalkeeper Paul Bernardoni, 24, will be a good assets for the squad, while centre-back Modibo Sagnan, 22, was one of the revelations of La Liga with Real Sociedad last season. Meanwhile, France have brought their most talented players from the 2002 generation: Isaac Lihadji (Lille), Timothee Pembele (PSG) and Nathanael Mbuku (Reims).

Almost out of nowhere, Randal Kolo Muani, 22, had a breakthrough season in Ligue 1 with Nantes, highlighted by a brace at the Parc des Princes against PSG. He also netted in the 2-1 warmup win against South Korea last week, off an assist from Anthony Caci, before Mbuku struck the winner in the 89th minute.

Muani and Mbuku are among seven Paris-born-and-bred players -- Bernardoni, Pembele, Sagnan, Alexis Beka Beka and Arnaud Nordin are the others-- in the squad out of 22. The next Olympic Games will be held in Paris in 2024 and you can bet that Mbappe, who will be 25 when it rolls around, will want to be a part of that on home soil. If France's unknown players can take their chance this summer, they might just get the chance to join him.