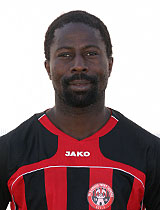 Ex-Hearts of Oak midfielder Francis Bossman could return to Serbia after giants Partizan and Red Star launched bids for his services, GHANAsoccernet.com understands.

The two top sides are battling for his signature after he impressed on a one-year deal with Superliga side FK Slobodan Point Sevojno last season.

But he could make the switch to join any of the rival side which will make the best offer.

"There is a great chance he may go back to Serbia to play for either Partizan or Red Star because both sides were impressed with his performance last season," a source close to the player told GHANAsoccernet.com

The 27-year-old was part of the Hearts of Oak side that won the 2004 Caf Confederation at the expense of rivals Asante Kotoko.

He also won four Premier League titles with Hearts, earning him a call-up into the Ghana national team in 2003.