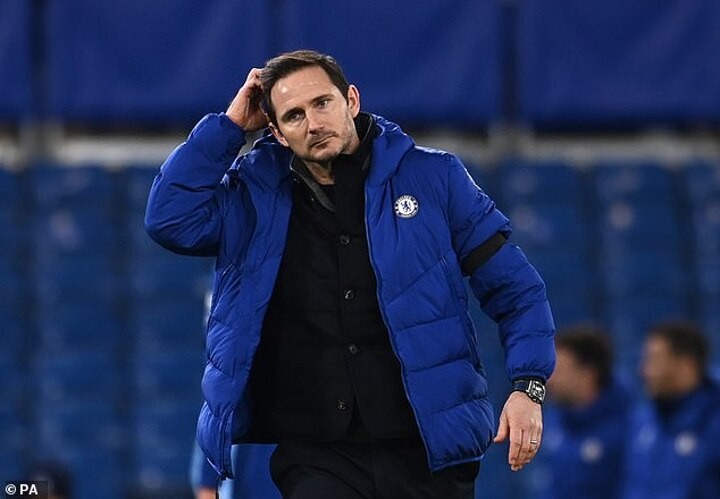 Frank Lampard could be set for a Premier League return with Crystal Palace reportedly interested in the former Chelsea boss as chiefs deliberate over the future of Roy Hodgson.

Lampard, 42, has been out of work since his Stamford Bridge sacking in January after overseeing a poor run of results that led to concerns regarding the club's hopes of a top four finish.

However, the Telegraph reports that Lampard is among the frontrunners for the Palace hotseat should the South London club decide to part ways with Hodgson this summer.

The 73-year-old's contract expires at the end of the season and Palace chiefs are understood to be deliberating whether they should replace the veteran before the start of the 2021-22 campaign.

Lampard reportedly wants his next job to be in the Premier League after being linked with the England U21 job last month following the sacking of Aidy Boothrooyd.

Palace are looking to make the next step from perennial mid-table finishers to top half challengers and the former Chelsea boss will seek assurances that he will be backed in the market at Selhurst Park, amid rumours of a £50m war chest this summer.

Moreover, Lampard's contacts at Chelsea could open the door to loan moves for the club's talented starlets, having nurtured the likes of Billy Gilmour during his time at Stamford Bridge, while Tammy Abraham's future is up in the air.

Eddie Howe and Sean Dyche have also been linked with the Palace job, but the Telegraph's report outlines that Lampard has moved ahead of the pair on the Eagles' shortlist.

While Lampard's 18-month stay in west London ended in misery, the Englishman won praise for his developing of talented youngsters through the academy while landing a top four finish despite not signing a player during his first season.

The German has since guided the club to the FA Cup and Champions League final, and looks set to secure a top-four finish this campaign.