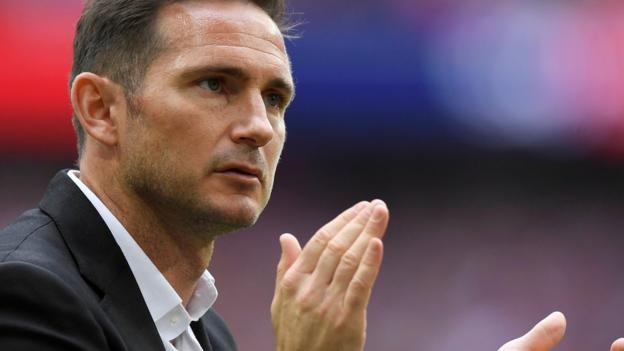 Frank Lampard says he has "loved" working at Derby County and expects to honour his contract, despite losing the Championship play-off final to Aston Villa at Wembley on Monday.

Persistent speculation has linked Lampard, 40, with his old club Chelsea.

But the Rams boss said talk of a return to Stamford Bridge was "irrelevant".

Report: Villa beat Derby to win promotion Relive Villa's play-off final victory at Wembley How did you rate the players?

With less than 10 minutes remaining, Martyn Waghorn got the merest of deflections to turn in fellow substitute Jack Marriott's goalbound strike to set up a thrilling finale.

But Villa managed to hold on during seven nervy minutes of stoppage time to secure a return to the top flight after a three-season absence.

'We need to plan for next year'

Lampard said big decisions need to be made regarding how the club cope with the budget limitations that the EFL's profitability and sustainability rules will bring and how that will affect the squad.

Loan trio Fikayo Tomori, Mason Mount and Harry Wilson could all return to their parent clubs.

"Whatever the financial position is, that is for me to work with," Lampard said.

"I am not crying about it but we need to make moves to plan for next year.

"They are important for the fact of where we go because with the squad of 12 or 13 players, we need to work on that.

"To stay at the level we are and to try to push on - and I do want to move forward - it is crucial.

"I have had a taste of working with a really good group who were so close to doing something special and I have loved that.

"It was the way I played for many years that I always wanted a bit more the following year. I have to understand also that (Derby owner) Mel Morris has put a huge amount into this club and I appreciate that too. We can't expect the rules to stay the same year after year after year.

"This year has been different and next year might be even more different, so it's important we talk about it and we know where we are at."