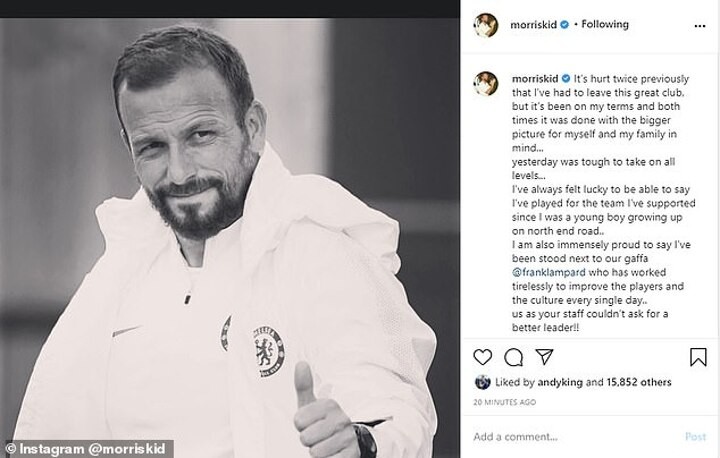 Morris, who played for the club between 1993 and 2003 and also served as an academy coach, accompanied Lampard to Stamford Bridge after also serving as his No 2 at Derby County.

But Lampard lost his job at Chelsea on Monday after Roman Abramovich lost patience following a woeful run of form that left the Blues in ninth place in the Premier League.

Former Borussia Dortmund and Paris Saint-Germain boss Thomas Tuchel is poised to take over but Morris has not been kept on and he posted an emotional goodbye on Instagram on Tuesday morning.

Alongside a picture of himself in his Chelsea training gear, Morris said it was 'tough to take on all levels' and insisted 'there has never been a bunch in that dugout that cared more inside Stamford Bridge'.

He wrote: 'It's hurt twice previously that I've had to leave this great club, but it's been on my terms and both times it was done with the bigger picture for myself and my family in mind...

'Yesterday was tough to take on all levels... I've always felt lucky to be able to say I've played for the team I've supported since I was a young boy growing up on north end road..

'I am also immensely proud to say I've been stood next to our gaffa, who has worked tirelessly to improve the players and the culture every single day.. us as your staff couldn't ask for a better leader!!

'There has never been a bunch in that dugout that cared more inside Stamford bridge!!

'I'm even prouder of the work that has gone on day in day out at cobham in what has been the toughest period anybody has had to face in charge... Thankyou so much to the fans for the support I've had personally throughout..I am one of you...

'Thankyou to Mr Abramovich and Marina Granovskaia for allowing me to fulfill one of my dreams... Chelsea is and always will be my club no matter what'.