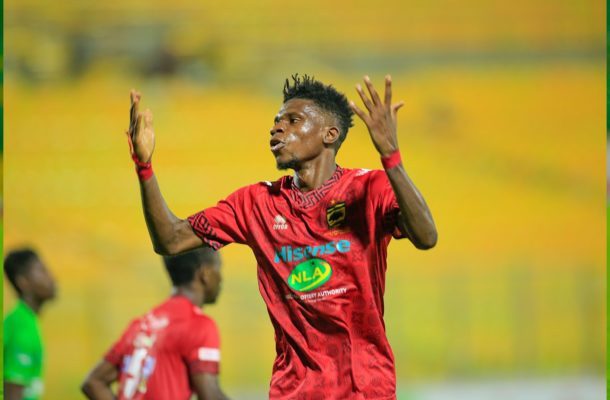 Striker Franck Mbella Etouga  is ‘unhappy’ at Asante Kotoko and is forcing a move away from the Ghanaian giants, GHANAsoccernet.com can exclusively report.

The 20-year-old has told the club's top brass he's no longer interested in continuing his career in Kumasi and wants out.

GHANAsoccernet.com Headquarters can report that the striker has refused to train in a bid to force his way out of the club.

The former AS Fortuna de Mfou striker has made his stance clear to the club's top hierarchy - who are also threatening to keep him until 2024.

Mbella signed a three-year deal with the Ghanaian giants in 2021 and went ahead to enjoy an explosive debut season.

The Cameroonian netted 21 goals for the Porcupine Warriors as they clinched the Ghana Premier League crown.

The striker refused to travel with the team to Sudan for their pre-season tour to highlight his desire and quest to force his way out of the club.

Kotoko coach Seydou Zerbo  has been left out the striker out of his traveling squad to Benin for the side's CAF Champions League match against Burkinabe outfit RC Kadiogo on Monday.

It's an exceptionally difficult time for the Ghanaian giants as their leading marksman is adamant in leaving the club.

Mbella was linked with a  non-existent move to Italian giants Udinese following his explosive debut season in the Ghanaian top-flight.

Kotoko have remained tight-lipped on the brewing matter but GHANAsoccernet.com can report that only a miracle will see the striker play for the Porcupine Warriors this season.

The situation could be messy if the Ghanaian giants opt to enforce his three-year contract.

Mbella has two more years on his current deal but remains confident he can force his way out of Kumasi.