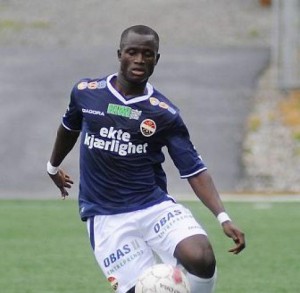 German Bundesliga II side Eintracht Frankfurt have completed the signing of Ghana midfielder Abu Mohammed on loan from Manchester City.

The 20-year-old will join his new teammates in February after the Africa Cup of Nations in Gabon and Equatorial Guinea.

Abu returned to Manchester City after ending a loan spell at Norwegian side Stromsgodset Drammen.

Frankfurt will use him for the second half of the season but have an option to keep him until 2013.

"If this goes well, we have a contract option for another year," Frankfurt Sporting director Bruno HÃ¼bner said.

"He is certainly not the same very big gain, but a great talent. It is a first attempt in the framework of our partnership with Manchester City."