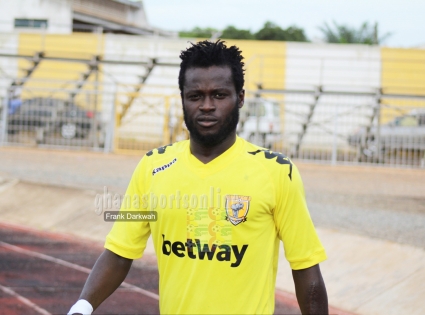 Former AshantiGold forward Hans Kwoffie has targeted a return to the club in the ongoing campaign.

Kwoffie left the Miners to join Omani side Al Oruba during the 2015/16 season after scoring 17 goals to win the Ghana Premier League goal king accolade.

According to the poacher, lots of clubs have expressed interest in his services but would like to return to AshantiGold this term.

“I am currently not engaged with any team but a lot of clubs have contacted me.”

“I will however love to return to my former club,AshantiGold.”

“It is the club I will like to play for again.” Kwofie told Adamu Muftawu.

Kwoffie has rich experience on the domestic front having featured for Premier League clubs, Heart of Lions, Bechem United and Medeama SC.