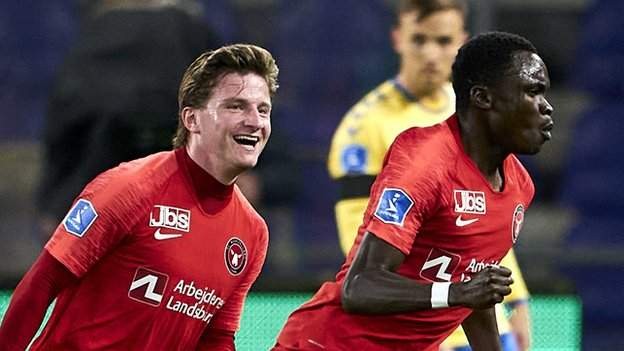 Two mortal enemies merge to become more powerful than ever before.

That may sound like the plot of a superhero movie but this is the story of FC Midtjylland, Liverpool's Champions League opponents on Tuesday.

The Danish side didn't even exist a little more than two decades ago but have risen to become domestic champions on three occasions and are now looking to upset the odds in Europe.

Nicknamed 'Moneyball FC', Midtjylland have been using statistics and data analysis to significant effect, bringing in underrated players on the cheap, unleashing their talent, and selling them on for a large profit.

It is a system also utilised by Championship side Brentford, which is of little surprise given the Bees' owner is also the majority shareholder at FC Midtjylland, but their approach has influenced many clubs, including Liverpool.

Midtjylland came into existence 21 years ago when two clubs - Ikast and Herning Fremad - were merged, with the new club taking the name of the region they were based in.

The impact was immediate as they secured promotion to the Danish top flight in their first season of existence.

"We were two clubs merged who hated each other and now we are in the Champions League against the odds," director Rasmus Ankersen tells BBC World Service Sport.

"It came out of necessity and constraints, we are not one of the big cities in Denmark and we compete against clubs with more privileges."

However, it was not until after a takeover by professional gambler turned football analyst Matthew Benham in 2014 that things really took off for Midtjylland.

"It has been a road going upwards and now we are standing on the top of the mountain with the best in Europe."

Stats the way to do itMatthew Benham, left, is the owner of Midtjylland

Benham is a lifelong Brentford fan who had taken over the Bees two years prior to his arrival at Midtjylland and through his company - Smartodds - the Danish side had access to a huge database of footballers across Europe.

The system analyses players' performances, using metrics such as chances created and crossing quality, with the aim of finding talent that was being undervalued.

It is based on 'Moneyball' - the statistical method Major League ­Baseball side Oakland Athletics used in the 1990s to recruit players.

"There isn't a lot that goes on here that doesn't happen at other clubs but here it is not driven by two interns in a basement, it's driven from the very top," Ankersen adds.

Using the system, Midtjylland were able to find and sign Finnish defensive midfielder Tim Sparv, who was the standout player as the Danish side secured their first Superliga title in 2015.

Continued, shrewd recruitment has helped them win further league titles in 2017-18 and 2019-20 as well as reach the last 32 of the Europa League four years ago.

"I was sceptical about this approach when I joined," says Hansen.

"Can it work, can it make a difference? But now when I look back, they have signed a lot of players who have been sold to bigger clubs for bigger amounts.

"It's an advantage, to get the right players, develop them and get a big transfer. It is a model to be proud of. Alexander Sorloth went to Crystal Palace after half a season here - he killed the league, and now he has gone for big money.

"It is a model that works."

'Conversion rates are random' - How does it work?

We're all familiar with just how many stats are available in football now.

But how does the model work? Ankersen gives a simple example.

"Let's say you are looking at two strikers," he says.

"One over the course of four games gets three chances and scores three goals. Another over the same number of games gets 10 chances but scores zero goals. Who would you pick?

"The footballing response is to say the first guy is more effective, we should pick him. We would say that actually conversion rates are quite random, so the measure of a good striker is not so much his ability to convert a large proportion of chances, the measure should be: 'Are you able to consistently get into positions where the probability of scoring is high?'

"If yes, over time goals will come. We would pick the second guy."

Liverpool boss Jurgen Klopp has long been an admirer of FC Midtjylland's approach and had planned to spend some time with the club following his departure from Borussia Dortmund.

"In my break, I was interested to go there for a while just to see what they do," says Klopp.

"But I signed for Liverpool so I couldn't. Even five years ago, it was interesting."

Klopp certainly maintained his interest in the club as two years ago he headhunted their throw-in coach, Thomas Gronnemark.

Since Gronnemark's arrival, Liverpool have gone from being statistically one of the worst in the Premier League at retaining possession from throw-ins to one of the best in Europe.

What next for Moneyball FC?Manchester United lost 2-1 at Midtjylland in the Europa League in 2016

Since their arrival in Europe, Midtjylland have bloodied a few noses and pulled off some unexpected results.

They beat Southampton in the Europa League play-offs in 2015-16 and won 2-1 against Manchester United in the first leg of their last-32 tie later that season, although in the return leg, they were beaten 5-1, losing 6-3 on aggregate.

Now they hope their approach can make its mark in their debut season in the Champions League.