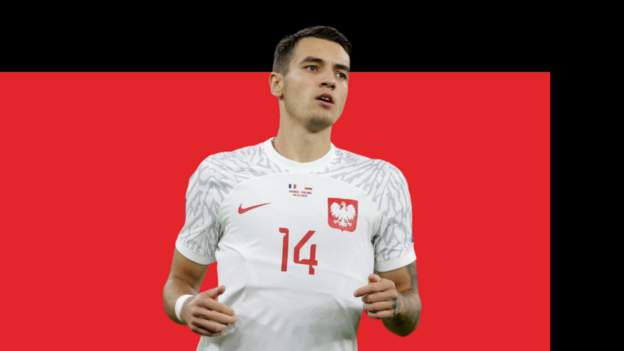 Jakub Kiwior played four times for Poland at the World Cup in Qatar, including against Argentina

It has been some four years for Arsenal's newest signing Jakub Kiwior.

In January 2019, the Polish central defender was let go by Anderlecht's academy without a senior appearance and was thrown into a relegation battle in Slovakia - one that ultimately ended in failure.

Since then, though, the 22-year-old has ended up marking Lionel Messi at the World Cup, been identified as a future leader for his country and has now joined the Gunners' Premier League title bid, after completing a move from Serie A's Spezia Calcio for more than 20m euros.

Kiwior, who played 37 league games for Spezia since joining in the summer of 2021, is Arsenal's second signing of the January transfer window - after Belgian winger Leandro Trossard - and will provide competition for William Saliba and Gabriel Magalhaes in the heart of the defence.

The move from Anderlecht's youth sides to central Slovakia in January 2019 proved to be a decisive move for Kiwior's career.

Four years ago, as a young defender in Anderlecht's academy, he had not had a chance to play for the club's first team before signing for FK Zeleziarne Podbrezova, a small team struggling in Slovakia's top flight.

It was far away from his big footballing dreams, especially when Podbrezova lost their relegation battle and dropped into the second division.

Michal Hanek, Podbrezova's assistant coach at the time, told BBC Sport: "I knew that if Jakub stayed healthy, he would be playing in a foreign club, in Italy or Germany.

"However, to be completely honest, I wouldn't guess Premier League and Arsenal. I am surprised by this transfer - but in a very positive way."

Hanek remembers when, after one early training session, Kiwior joined his friend, Podbrezova goalkeeper Richard Ludha, to watch a local non-league game nearby.

"When I think about 'Kiwi', I always remember doughnuts," says Hanek. "He went there after our training and I asked him what he ate for lunch. He answered, 'Doughnuts with jam'.

"That was funny and I laughed a bit, but then I explained to him as a pro you cannot eat doughnuts for lunch. He immediately accepted that he needed to take care of his body and eating, and always tried to learn from coaches' advice."

Despite relegation, Hanek believes Podbrezova became a valuable learning ground for him.

He said: "Jakub had all the requirements for senior football. He had good physical attributes, was great in duels, and as a young player he was already great thanks to his physical quality.

"He would already absorb big pressure. In important games, it was visible that he was mentally very solid. He didn't communicate too much and was rather introverted, but mentally very strong and was never afraid of tough moments and tough opponents.

"There were things to work on, though. He had a problem with game tempo, organisation of the defence, but it was clear that would improve when he would start playing regularly."

Slovakia proved an ideal place for his development as, due to lack of money, a lot of local clubs relied on young players, who could get regular playing time and would eventually bring money from transfers.

MSK Zilina, one of the most successful clubs in Slovakia and a breeding ground for the country's national team, recognised his potential and signed Kiwior after Podbrezova's relegation.

"We follow young players in Slovak league systematically," says one member of MSK Zilina's management team. "We saw potential in him, and particularly because he was left-footed. Those are precious types of centre-backs. He had enormous talent so we worked hard to get him and it helped as [Podbrezova] got relegated.

"Kiwior adapted to senior football most quickly and I would also say that he was the biggest talent."

After playing a few games for Zilina's reserves in the second division, he broke into the first team starting line-up and became one of their key players as they reached the Slovak Cup final.

"He became a leader in the dressing room. Sometimes he had the captain's armband," MSK Zilina's official adds. "He is a friendly guy without any conflicts and he focuses on football.

"He is very calm, but also goes into challenges and he is not stressed at all. In tough situations, he can find solutions."

Jakub Kiwior made his Poland debut in 2022'A future Polish leader'

Kiwior quickly attracted interest from abroad, including Borussia Dortmund, but It was Spezia Calcio who won the race, signing him for 1.5m euros in August 2021.

Over the last year and a half, he has become one of the best young defenders in the league, with Spezia also playing him as a defensive midfielder at times, even if that role doesn't feel natural for Kiwior.

His debut for Poland followed in June 2022 against Netherlands in the Uefa Nations League, and he immediately became a starter.

In December, he was in Poland's starting line-up at the World Cup, appearing in four matches as the country reached the knockout stages for the first time since 1986.

"Kiwior is regarded as the main hope, one of the most talented players and probably key national team defender in the future," says Mateusz Janiak, a Polish football journalist at Weszlo.com.

"In the senior national team, he has formed a centre-back partnership with the experienced Kamil Glik and we can say that Kiwior grew up alongside Glik.

"Glik can't build attacks, so he gave all balls to the younger Kiwior and due to that he has to take responsibility. Kiwior has to transport it to the midfield or attacks. Progressive passes or runs - that was Kiwior's job. Not an easy one. That helped him.

"He is really good at transporting the ball alongside the field, makes progressive passes and runs. He's left-footed, that's another plus. If you ask about weaknesses, probably some actions in defence, sometimes he is still making bad decisions."

Whatever happens in his next chapter, Kiwior's rise to the top has been far from straightforward.