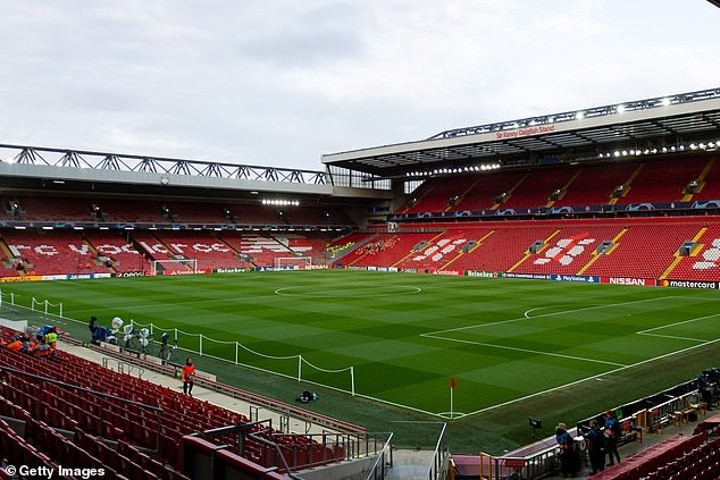 Danny Murphy has been in football for 30 years as a player for Crewe, Liverpool, Charlton, Tottenham, Fulham and Blackburn and now a respected analyst for the BBC, The Mail on Sunday and talkSPORT.

He gives Sportsmail a unique insight into some of his adventures, famous people he has met along the way and what makes the game so great.

A is for ANFIELD

My Dad took me and my brother to Liverpool for my first match, against Manchester United in 1985. We arrived two hours early, paid £1.80 at the juniors' turnstile and were the first ones in. The memory of first seeing the pitch from the back of an empty Kop is still with me. I feel blessed to have played there.

B is for BOOTS

I had a deal with Reebok at 14 but didn't realise you could ask for a new pair when the old ones wore out. Hence I played for the first time at Wembley for England Schoolboys in a torn boot with a missing stud. As an apprentice at Crewe, I cleaned boots for European Cup winner Kenny Swain.

C is for CREWE

Aston Villa and Sheffield Wednesday wanted me at the start of my career but I chose Crewe because they used Ajax coaching methods. The skill levels of their young players was fantastic and many of them went on to the Premier League, such as Rob Jones and Seth Johnson.

D is for DEFOE

Not many of my former team-mates are still playing but Jermain continues to score goals for Rangers at the age of 37. Some centre-forwards weren't the best trainers but he was sharp and at it in every session for Spurs. He had that knack of striking the ball so cleanly without a full backlift.

E is for ENGLAND

I was standing outside a fish and chip shop when the FA rang to say I'd made my first squad. Even training was amazing, watching Rio Ferdinand — a defender — in keep-ball made me appreciate the levels needed. The best part of my debut against Sweden was having Mum, Dad and my brothers there.

F is for FULHAM

I wasn't playing at Spurs and chose Fulham ahead of Birmingham on deadline day in 2007. Once Roy Hodgson arrived at Craven Cottage, I matured as a player and felt influential. Scoring at Portsmouth to keep us up was the most important goal of my career. From there we went on to a European final.

G is for GOALS

Some people love 30-yard screamers, others beautiful team goals. I've always had a thing for great headers, maybe because I didn't score too many myself. One that always stuck with me was Keith Houchen's diving header in the 1987 FA Cup final. Tim Cahill was the best header of my time.

H is for HOULLIER

He shaped my career. I wanted to join Ipswich on loan early in my Liverpool career but Gerard told me firmly: Go to Crewe or stay here. I went, played all the games and we staved off relegation. Houllier said: 'You passed the test. I wanted to see how much you wanted it and you do.'

I is for ICE BATHS

I hated them but grew to recognise the benefits for recovery. At Charlton, they'd fill wheelie bins and you'd have to climb in chest-high. The first 30 seconds were horrendous. The only player who refused to take one was Pascal Chimbonda at Spurs. He said he'd rather be dropped.

J is for JOKERS

Neil Ruddock did me up a treat at Liverpool. I bought a green Mazda and Razor wrapped up a big fish deep in the footwell. For days and weeks, I didn't know what the smell was, I'd be checking the air con, my armpits. Pranks were frowned upon by managers over the years in case it led to fall-outs.

K is for KENNY

Kenny Dalglish was my first idol, my Mum even stitched a red '7' onto my first Liverpool shirt. Many years later, he tried to sign me for Newcastle but at first I didn't believe it was him on the phone. I last saw him at comedian John Bishop's birthday party and I was still in awe to be honest.

L is for LINEKER

Gary has been a big support on Match of the Day. Nothing prepares you for that first live show when the music starts and you know millions are watching. Gary is always calm. At the 2014 World Cup in Brazil, he and Alan Shearer made sure the new boy felt part of the team and was always invited to dinner.

M is for METATARSAL

I cracked rather than broke mine at the end of an England training session in 2002 but it meant I missed the World Cup. I went on holiday with some pals and watched the games on TV, still wearing a protective boot, feeling sorry for myself. I had to deal with seeing my opportunity go.

N is for NOU CAMP

My first visit in 2001 was overwhelming. The pitch was like a carpet and the noise from 90,000 was deafening. I was thinking, 'This is ridiculous'. We held Barca 0-0 and beat them at Anfield to reach the UEFA Cup final. Pep Guardiola had criticised our tactics so our lads had a go back at him in the tunnel.

O is for OWEN

Michael didn't crave or court fame but things changed for him overnight after the 1998 World Cup. We'd share a lift to training at Liverpool and once we stopped at a McDonald's on the way home but had to leave within 10 minutes because the place became full and people were getting hysterical. It frustrated him.

P is for POLL

Graham Poll delivered my first red card, against Manchester United, but I blame Jamie Carragher more than him. As I went to tackle Denis Irwin, I could hear Carra screaming, 'Get stuck in'. Gerard Houllier slaughtered me afterwards. My favourite ref was Mark Halsey: we'd happily insult each other.

Q is for QUICK

The fastest I played with were early Michael Owen and Dennis Rommedahl at Charlton. Quickest opponent was Thierry Henry, who was so powerful but elegant at the same time. I'd pay money to see a race today between Adama Traore, Sadio Mane and Kyle Walker.

R is for RETIREMENT

My last game turned out to be for Blackburn at Cardiff in 2013 but I had no idea at the time. I still had a year on my contract but that summer they wanted to go another way so I took a deal to leave. I thought that I'd go into coaching but once I started doing media, I enjoyed it.

S is for SOUTHGATE

An England team-mate, Gareth was intelligent, warm and, as a senior player, was always available if you wanted advice. I think the main thing he's created as a manager is real team togetherness. The players all want to be there for international games. There are no problems with pull-outs.

T is for TOTTENHAM

The biggest regret of my career is not showing Spurs fans my best form because they always backed me. But I don't regret signing for Spurs because it was a genuinely fantastic big club. In retrospect, my Dad's illness and passing had more of an impact on my game than I maybe realised.

U is for UNITED

Manchester to be precise. You can't imagine my satisfaction sitting on the team coach at Old Trafford seeing the contorted faces of their angry fans, giving me the finger because I'd scored the winner. It happened three years in four. They booed me non-stop when I went back with Charlton.

V is for VAR

Regular readers will know I'm not a fan. I hope the lockdown will persuade the authorities to reconsider but I'm not holding out much hope. From the moment Gabriel Jesus' goal against Tottenham was disallowed because the ball had brushed Aymeric Laporte's arm, it has played havoc with the game I love.

W is for WORLD CUP

I missed out as a player but travelling around Russia for TV in 2018 was just fantastic. It was my good fortune to be at the best three games in the competition, concluding with Belgium v Brazil, and I had so many 'tourist' experiences, from the beaches of Sochi to the temples and palaces of Kazan.

X is for XMAS PARTIES

It was a big thing at Liverpool. My debut was dressed up as a Native American duetting with Paul Ince on 'New York, New York' and being pelted with beer by unimpressed team-mates. At Fulham, Jimmy Bullard and I went as Batman and Robin. He must have spent hundreds on his outfit.

Y is for YOUTH

Young players are more disciplined now but I can look back on great times. The 1997 Under-20s World Cup in Malaysia was the first time I met Jamie Carragher, Michael Owen, Jason Euell and Jody Morris. The training camp in Singapore was like a holiday but forged friendships that remain today.

Z is for ZAMORA

Bobby had fantastic ability, was good physically and technically — you could tell that by the way he was comfortable taking penalties with either foot. Lack of consistency was his problem. In 2009-10, he was the biggest reason Fulham had our long run in the Europa League. It was sad he could only play in the final with a pain-killing injection.