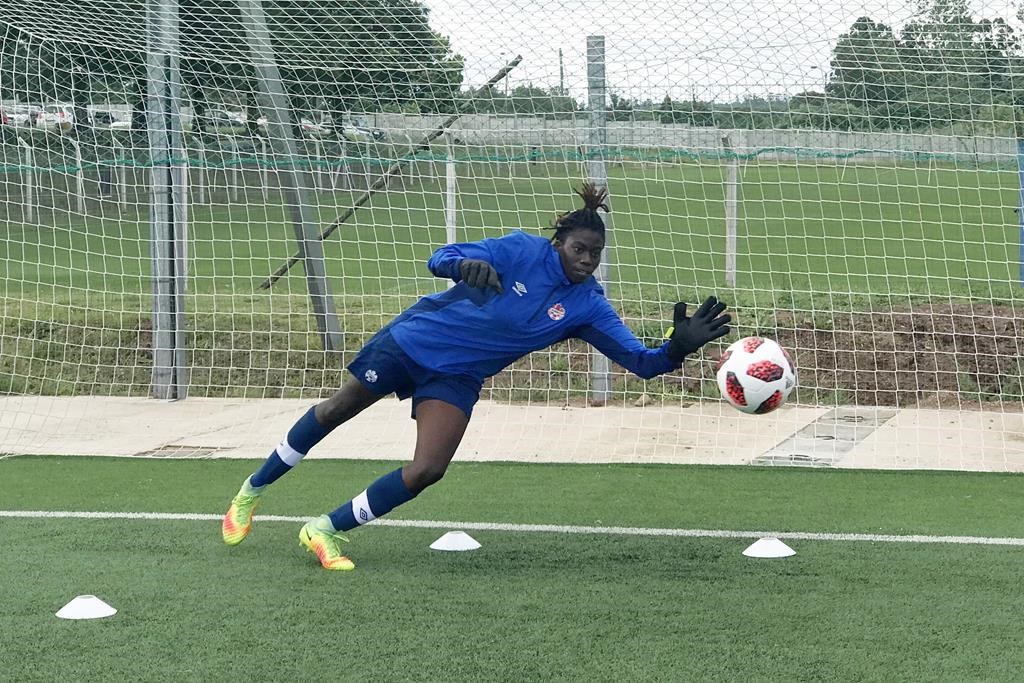 Canada coach Rhian Wilkinson is proud of the diversity and accomplishments of her Canadian team at the FIFA U-17 Women’s World Cup in Uruguay.

“It’s Canada in a nutshell isn’t it?” said Wilkinson, who won 181 caps for Canada as a player. “It’s what we pride ourselves in being — a team that represents many different faiths and ethnicities and people groups … I’m proud we’re a good representation of our country.”

Kayza, who played for Ghana as a 15-year-old at the 2016 U-17 World Cup, switched international allegiance this year and is now wearing the Maple Leaf in Montevideo where Canada takes on Germany in quarterfinal play Sunday.

“I’ve learned a lot from both of the teams I’ve been with,” said Kayza. “And both of them have been different experiences that have definitely built me not only as an athlete but as a person.”

The Canadian team’s mantra is “21 strong,” referring to the 21 women on the roster. Canada captain Jordyn Huitema says the five-foot-eight ‘keeper is a big part of the team.

“On and off the field, she’s incredible. Her energy off the field is just electrifying. It rubs off on everyone. She really gets us going. When the mood’s down, she’s always there to lift everyone up. On the field she’s an amazing goalkeeper.”

The Murrays are certainly an amazing story.

After working in Malawi, Karen earned a master’s in education — realizing health and education were intertwined.

She then spent almost three years in Ghana with the World University Service of Canada, a non-profit organization dedicated to improving education and other opportunities for youth around the world.

During her stay in Walewale, she had applied to adopt a baby. In early 2001, near the end of her contract, she got a call to come to the social services office in Tamale, some 120 kilometres away. They didn’t say why.

Once she got there, she was told they had a baby for her. She was directed to a local orphanage and told to buy some clothes en route, because she couldn’t take the ones the baby was wearing.

When she got there, 30-day-old Kayza was waiting. People at the orphanage tied the baby to Karen’s back and she started the 1.5-kilometre trek back to the main road to catch a ride in a crowded mini-van.

“I went back home and went ‘OK, I have a baby,'” Karen recalled. “But she didn’t actually cry for over two weeks. She was so close to starvation. She was so skinny — she was 2.2 kilos and she was tall, she was even long and lanky then. She didn’t cry for two solid weeks because she was conserving her energy.”

Mother and daughter returned to Canada when Kayza was seven months old, after completing the necessary paperwork. It was not an easy trip — first Kayza contracted malaria and then 9/11 grounded travel.

Next stop was a stint in Kenya where Kayza had a camel-riding party for her second birthday.

Back home Karen made sure Kayza connected with the Ghanaian community in Ottawa, arranging lessons in Twi, a dialect of the Akan language spoken in southern and central Ghana. It was also a way to connect with young Ghanaians.

Kayza returned to Ghana in 2012 for the first time since her adoption. Mother and daughter went on a month-long trip to see the country.

“Just seeing the people and culture, it was new but it was also familiar to me,” said Kayza. “It was really awesome, it was like a second home.”

Karen, 52, ensured it can be, buying a plot of land in Ghana for her daughter.

A talented basketball and soccer player growing up, Kayza was as cool as a cucumber the moment she first took up playing goal, according to Karen.

A 15-year-old Kayza, after two months training in Africa, helped Ghana to the quarterfinals of the 2016 World Cup in Jordan, thrust into the starting role after an injury to another ‘keeper.

Ghana lost 5-0 to Japan before beating the U.S. (2-1) and Paraguay (1-0) to reach the final eight where it was dispatched 2-1 by North Korea, which went on to beat Japan in the final.

Kayza didn’t believe she was ready at the time but says any nerves and worries disappeared when she stepped on the pitch in Jordan.

“It was like ‘OK I’m here. What can I do to perform the best I can with the tools I’ve been given.'”

She said Ghana soccer officially were initially frustrated as losing her, but then took pride in her opportunity.

Coincidentally, the Ghana team is staying at the Canadian hotel in Uruguay. They welcomed Kayza and invited her to a meal, said Karen, who is watching the Canada games back home on TV with members of Kayza’s former team, the Ottawa Gloucester Hornets.

Kayza’s “dream opportunity” turned into reality when she started in Canada’s final round-robin game against Spain.

“To me, just being able to represent both of my nationalities was incredible.”

A talented Spanish side made life difficult for the Canadians, launching 21 shots (seven on target) at Kayza while collecting nine corners to Canada’s two en route to a 5-0 win. She chooses to take positives from the loss, saying the experience “has really given me more fuel to push harder.”

Kayza, along with fellow Canadians Aaliyah Scott and Julianne Vallerand, is headed to West Virginia University next year. The Mountaineers have a history of fielding Canadian talent with Kadeisha Buchanan (Lyon) and Ashley Lawrence (Paris Saint-Germain) among their alumni.

She plans to study communications, saying she wants to find better ways to interact with people so she can fulfil her goal “of being able to make a difference.”

“I’m very fortunate that my mother adopted me,” said Kayza. “She has been amazing from the beginning, keeping me linked to a part of my culture as well as helping me to follow my dream.

“She’s given up a lot for me to be able to pursue what I’ve wanted to pursue. And I’m forever grateful. She has done some amazing work in Africa … And she taught me a lot about how to be a good person, how to make change in the right way.”

Kayza means precious — her middle name means ‘Blessing from God.’ Her younger sister Kiama is 15 and half-Kenyan — her name means miracle or blessing.