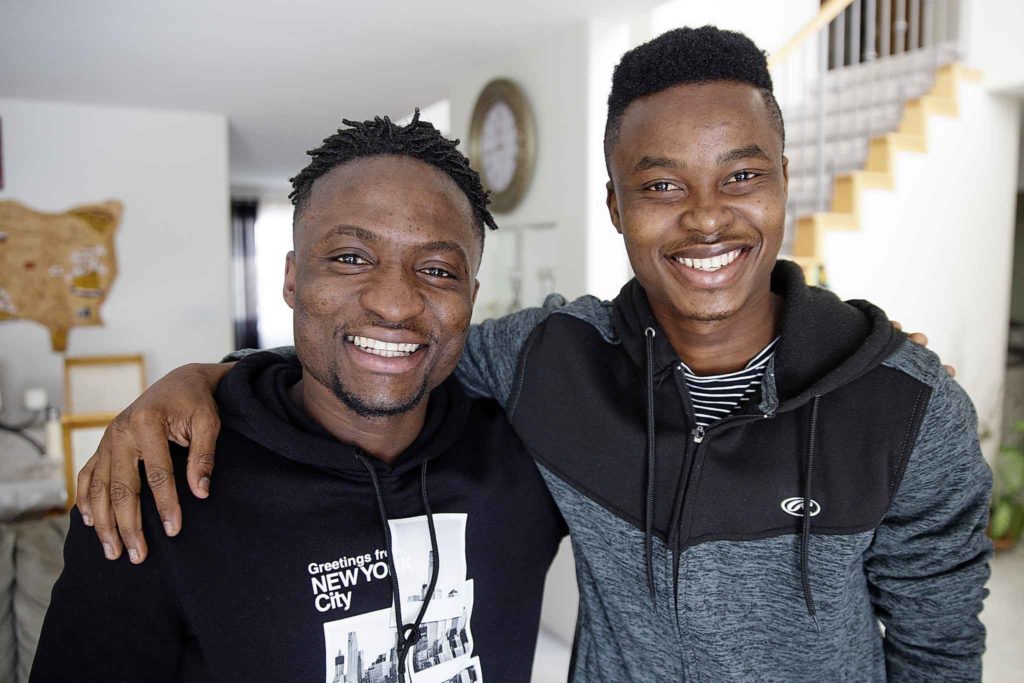 MIKE DEAL / WINNIPEG FREE PRESSSolomon Kojo Antwi (right), a 19-year-old from Ghana, signed with Valour FC last month and has been living with teammate Raphael Ohin (left) who is going into his second year with the team and who’s also from Ghana.200121 - Tuesday, January 21, 2020.

Solomon Kojo Antwi didn't exactly know what he was getting himself into when he got off the plane and arrived in Winnipeg on Boxing Day.

But for the 19-year-old winger from Accra, Ghana, it didn't matter. All that mattered to him was that coming here meant he'd finally have a chance to play professional soccer. Seeing snow for the first time was just an added bonus, if you can call it that.

Valour FC signed Antwi in the middle of last season, but it wasn't announced to the public until Dec. 30 as it took several months to get him to town due to visa issues.

Antwi spent Christmas Day in the air as he had to travel nearly 13,000 kilometres from Ghana to get to the Manitoba capital.

"I know clubs both in England, Hungary and other areas that tried to sign him and the visa was the sticking point," Valour head coach and general manager Rob Gale told the Free Press earlier this month.

"We know the person who represents him and the group that has worked with him... have worked with some of the greatest African exports in world football in the last 10 years. Again, I don't really want to go into those details because if you start to mention names, you'll start to have comparisons against him and people will be expecting things automatically. You never know when a player travels that far and it's his first time out of the country and on a flight to North America, etc. But he's been highly scouted, highly vetted and he comes with great potential and that's what it is at this stage."

Antwi is no stranger to packing his bags to pursue his soccer dreams. He grew up in Elmina, Ghana, but moved four hours to the capital of Accra when he was nine years old to live with his sister. He was then noticed by the Glow Lamp Academy and he became a top prospect in their system. Antwi came close to making his professional debut last year when he was offered a contract by K.A.A. Gent of the Belgian Pro League in February, but he was unable to secure a visa, which kept him in Ghana. So when it finally worked out and he signed a professional deal with Valour, he didn't even bother to do any research about Winnipeg. He was just overjoyed to finally be getting a chance to play for a living.

"The way my agent spoke to me about Winnipeg and Valour FC, I was in love," said Antwi, who scored twice for the under-20 Ghanian national team in three games this past summer. "I couldn't get the mindset to do some research. I just wanted to come and make it happen."

The average temperature in Accra in January is over 30 C. Obviously, Antwi, who scored a goal a couple of years ago against the Ghanian senior men's team in a friendly when he played for Glow Lamp, quickly realized that living in Winnipeg was going to be a bit of an adjustment. Luckily for him, he's living with a teammate who knows exactly what he's going through — Raphael Ohin. The 24-year-old, who grew up in Ghana before settling down in Winnipeg five years ago, is coming off his first professional soccer campaign where he was one of the few bright spots for a Valour team that often struggled. Ohin lives with his aunt and uncle and they welcomed Antwi into their home with open arms.

"It's not easy leaving your family and going to a place you've never been to before," Ohin said. "Having a Ghana brother come here, it's perfect that he's staying with me. I can just share my experience with him and also introduce him to new styles and the community environment. And also helping him out with the weather here. He's not used to it yet."

In addition to helping Antwi get used to living in a new country, Ohin has been giving his fellow countryman advice on how to adapt to playing at the pro level. Ohin sat on the bench for the first half of the Canadian Premier League spring season before he became a mainstay in the starting 11.

"When he came here, I told him 'Obviously you're a good player. That's why you've been signed by the team. But, it's not going to be easy.' In the professional environment, I had that experience. It was a tough challenge for me," said Ohin, a standout for WSA Winnipeg before he signed with Valour.