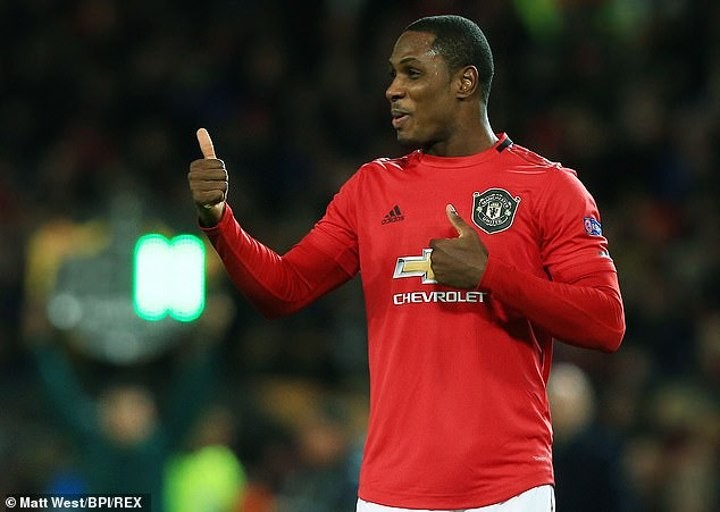 When Odion Ighalo arrived at Manchester United before deadline day in January, there were plenty of sniggers surrounding the desperate depths they had plunged just to sign a striker.

After all, trying to replace the injured Marcus Rashford with a striker who was playing in China and was last seen in England struggling to hit a barn door with Watford was hardly going to set the pulses racing at Old Trafford.

Yet Ighalo's eight appearances before the coronavirus outbreak saw him bag four goals and the boyhood United fan has settled well enough to be wanted for an extended stay beyond his loan spell, which expires this Sunday.

Ighalo is 'edging ever closer to an extended stay at United after it was revealed the Chinese Super League's foreign players are set to be banned from returning until October.

Although the striker's loan deal is set to expire this Sunday and leave him in limbo between England and China, his agent has now revealed that an extension is close to being agreed.

'The Super Eagle feels very good in Manchester with which it is very close to a salary agreement,' Ighalo's agent Ladi Salami told FootMercato. 'Negotiations with the Chinese are ongoing and are going well.'

Already Ighalo is well on his way to cult status among supporters... just like these other unsung heroes seen at United over the years.

When Fletcher first broke into the United team in 2003 he was tipped by many as the man to replace David Beckham on the right of the midfield following his summer departure to Real Madrid.

A baffling thought now given how he would develop a totally different playing style over the next 12 years at Old Trafford by gradually moved into the centre.

But the Scot served the club with nothing but distinction, was always reliable, made few errors and managed to do it all while also suffering with the chronic bowel disease ulcerative colitis. He was a safer pair of hands to Sir Alex Ferguson than many of the legendary manager's goalkeepers during his long reign at Old Trafford.

Not one of Ferguson's better buys on the face of it. He arrived with big expectation following a then hefty £6.9million move - by 2002 standards - from Argentina.

But following a series of missed sitters and poor form the Uruguayan was soon shipped off to Villarreal and Atletico Madrid, where of course he rediscovered his scoring touch and showed his true class.

So what makes him a cult hero? Following just two Premier League goals in nearly a year, he rocked up at bitter rivals Liverpool and struck twice (via some dodgy Jerzy Dudek goalkeeping) to give United three precious points at Anfield.

With a treble-winning team at his disposal, Ferguson didn't have much rebuilding to do in the summer of 1999 so instead brought cover for across the midfield in Fortune.

The South African arrived from Atletico Madrid for £1.5million and, despite staying for seven years, was never given a long run in the first team.

Yet he never complained, despite his lack of appearances costing him Premier League winners' medals in 2000 and 2001. He fell one short of the required 10 in 2003 but such was his warm presence within the club, he finally managed to get a winners' medal by special dispensation.

Little was known about 'Chicharito' when he rocked up at United from Mexico in 2010. One year on and with 20 goals from 45 appearances to his name, he was already established as one of the club's best attacking talents.

He never took command of matches but his nature to pop up with crucial goals in unorthodox fashion - often from off the bench - made him an instant hero at Old Trafford.

He never quite hit the same form again as he gradually fell down the pecking order following Ferguson's 2013 departure, before leaving for Bayer Leverkusen in 2015. He is though still fondly remembered by supporters.

Not many of the post-Ferguson signings have been a success, but Herrera would not have looked too out of place in one of his legendary sides.

Yet he often struggled to get into any of those picked by Louis van Gaal, Jose Mourinho or even Ole Gunnar Solskjaer.

United supporters recognised his excellent passing ability and work-rate though, and were left disappointed when his contract expired last summer and he joined Paris Saint-Germain on a free transfer.

It's hard to recall Denis Irwin ever having a bad game for Manchester United and it wasn't just supporters who noticed his crucial contributions at left-back.

Roy Keane once got into a heated argument with Patrick Vieira over his refusal to include his Irish compatriot in their combined XI of Arsenal and United team-mates.

One of the first great foreign imports in the Premier League. While some United fans will remember him more than others, few who saw that era will forget his hat-trick in the 5-0 win over Manchester City in 1994.

With plenty of pace and flair to light up the United attack, the flying Russian winger's devastating pace was one of Ferguson's key attacking weapons before he was surprisingly sold to Everton at the end of the 1994-95 season.

Some players in this list took years before being adopted as favourites by United supporters. Macheda took just one afternoon in 2009.

With United trailing Aston Villa in a crucial match late in that season's title race, the 17-year-old Italian was called off the bench for his debut. After Cristiano Ronaldo's equaliser, Macheda then performed a deft turn before firing home a stunning winner in the final minute.

A goal in his next league game against Sunderland had many hoping a wonderkid was in the making. The truth was it was a flash in the pan as he never hit the same heights again, but he will forever be immortal to those inside Old Trafford for his moment that has gone down in Premier League folklore.

To those outside Old Trafford, David May is just the chap who hilariously gatecrashed the 1999 Champions League final celebrations despite not playing a single minute of the campaign.

But that does the defender a disservice to his United career as he was an important component to Fergie's team in the mid 1990s.

Although rarely first choice, he was adept across the back four playing 112 times across nine years, with much of those matches coming between when he joined in 1994 and 1997.

There are four reasons O'Shea makes the list of cult heroes at Manchester United.

The first of those is for his 12 years of service before his 2011 departure. During this time he was talented enough to start as a central defender but he also had the skill-set to cover across the back four as well as in midfield.

The other reasons? He played 394 games for United and only scored 15 times. Yet one of those was a stoppage-time winner at Liverpool, while another saw him outrageously chip Jens Lehmann at Arsenal in a 4-2 win before celebrating like he did it every week. Oh, and he once nutmegged Luis Figo. No, really he did.

Not everyone's cup of tea at Old Trafford given his past Liverpool connections and also because by the time he rocked up at United in 2009 at the age of 29, his best days were long gone due to chronic injuries.

Although Owen's blistering pace, which had made him one of the world's feared strikers, had long deserted him, he was still a lethal finisher and he often popped up with important goals on his rare appearances.

His finest hour at United was his first Old Trafford goal, where in typical Owen fashion he sniffed out space to collect a pass before firing in a winner in the sixth minute of stoppage time in a 4-3 victory over Manchester City to put the 'noisy neighbours' back in their place. (But not for long.)

Louis Saha had his work cut out after joining from Fulham in 2004. He was part of a United side in transition under Ferguson but he stepped up well.

The Frenchman found the net a very respectable 42 times in 124 games over the next four years, and his bursts of form even found him displacing Ruud van Nistelrooy from the team on occasions.

He could even have found the net on more occasions but injuries blighted his stay at Old Trafford before he was sold to Everton.

In the early 1990s there were bundles of talent coming through, including Lee Sharpe, who could just about walk into any Premier League side he wished on the left of midfield.

The trouble was, the only one where he couldn't was at Old Trafford due to some pesky young chap called Ryan Giggs, who would go on to become one of United's greatest ever players.

Fergie moved him to the right flank, to compete with Andrei Kanchelskis. But another exceptional talent in David Beckham was soon earmarked as the future for that position.

Still, Sharpe did at least have his moments in the sun at United, scoring a back heel against Barcelona and a hat-trick against Arsenal in the League Cup, while showcasing his legendary 'Sharpey shuffle' hip-wiggling goal celebration.

Can cult heroes also be club legends? If anyone can cross the divide seamlessly it's Solskjaer and he is now looking to do the same from inside the dugout at Old Trafford.

Of course Solskjaer's legendary status comes from scoring the dramatic stoppage-time goal at the Nou Camp to win United the Champions League and the treble in 1999.

Typically he came off the bench to do the damage that night and that is how much of his United career played out. He never seemed to be as effective when he started matches but the 'baby-faced assassin' so often would turn a game on its head when called upon as a substitute.

One of his famous late cameos came at Nottingham Forest in 1999 in an 8-1 away win after he arrived on field as a sub with just 19 minutes to play. He then rattled in four goals and effectively typecast him as the ultimate 'super-sub'.

Although Ferguson stumbled from one disaster to the next trying to find a new No 1 goalkeeper after Peter Schmeichel, he always had an excellent No 2 in Van der Gouw.

Initially brought as back-up to Schmeichel, he was a cool head between the sticks and never seemed to drop the clangers on or off the pitch that blighted the Dane's successors, such as Mark Bosnich, Fabien Barthez or, infamously, Massimo Taibi.

Van der Gouw was a little short of being the top quality that United desperately wanted at the time but he served the club with distinction for six years before his 2002 departure.