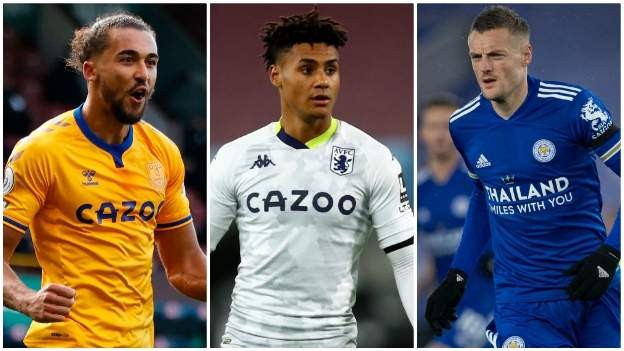 Who makes your non-league to Premier League XI?

The Everton striker netted in Saturday's 1-1 draw with Burnley to take his Premier League tally to 11 goals in 11 games.

He has got more goals than anyone else in the top flight and is showing no sign of slowing down, impressive for a player who just five years ago was playing non-league football.

The 23-year-old had a spell on loan at Stalybridge Celtic from Sheffield United before joining Everton in 2016, but he is far from the only player to have risen from non-league to Premier League.

Five of the current top-10 scorers played non-league and we take a look at some of the other sharp shooters who have worked their way up from the bottom to be currently 'living the dream', before giving you the chance to pick your all-time non-league to Premier League XI.

Calvert-Lewin: From non-league to England call-up

No discussion about strikers who have made their way up from non-league is complete without mention of Jamie Vardy.

And it is far from finished yet. Aged 33, Vardy is this season's joint-third top scorer with eight goals as he looks to fire the Foxes towards another title challenge.

Before his recent knee injury, Ings was one of Europe's form strikers, with 15 goals in just 25 appearances in 2020 putting him ninth on the list of top goalscorers in Europe's top five leagues this calendar year.

But it has not always been glitz and glamour for the Saints striker, who saw a two-month loan spell at Conference side Dorchester cut short by an injury crisis at then League One side Bournemouth in 2010 and the rest, as they say, is history.

Now, arguably in the form of his life aged 28, Ings will believe he has a very good chance of being involved in England's Euro 2020 campaign next summer.

Wilson is another player with a chance of completing his rise from non-league by being involved in England's Euro 2020 campaign in seven months' time.

The 28-year-old started his career at Coventry, the city of his birth, before spending four months at Conference side Kettering and a further month at non-league rivals Tamworth in 2012.

The striker has never looked back and, after a prolific five years at Bournemouth, Wilson has now bagged himself seven goals in just nine appearances for the Magpies.

Getting a hat-trick against the reigning Premier League champions is a pretty memorable way to score your first goals in the top flight, but that is what Ollie Watkins did when he hit three for Aston Villa in their 7-2 thrashing of Liverpool in October.

Watkins learned his craft coming through the ranks at Exeter City but it was a spell on loan at Weston-super-Mare that the 24-year-old really credits with sharpening his shooting skills.

After a prolific season at Brentford in 2019-20 when he hit 25 goals in 46 Championship outings, Watkins moved to Villa in the summer and already has six goals in seven games.