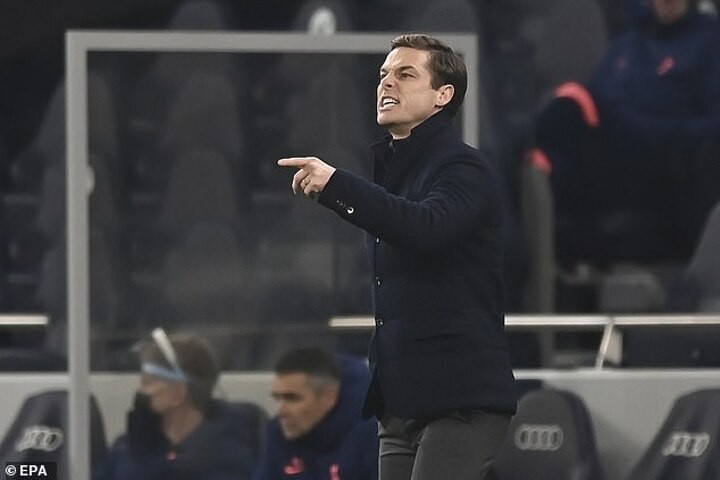 Fulham boss Scott Parker shrugged off his pre-match war of words with Jose Mourinho and hailed his side's battling display to secure a 1-1 draw at Tottenham.

The pair had clashed after Spurs' game with Aston Villa was postponed and the Premier League quickly rearranged this match with the Cottagers, which was originally due to be played on December 30.

It looked like his grievances had foundation as Spurs dominated the first half and led through Harry Kane's first-half header, before a spirited second-half showing from Fulham was rewarded with an Ivan Cavaleiro leveller 16 minutes from time.

Afterwards Parker said: 'I was very very impressed. I thought we were outstanding tonight from start to finish.

Parker called the Premier League's decision on Monday to cram this rearranged game into the Wednesday night slot as 'scandalous' after a recent outbreak of coronavirus at the club, yet Spurs counterpart Jose Mourinho said the Cottagers should have to say sorry to everyone if they named a strong team.

They did that, with 10 of the players who played their last Premier League game on Boxing Day in the starting line-up, and Parker was rewarded with a performance that he described as 'immense'

He added: 'To prepare the game like we did, and play like we did, I'm proud of the team because of how we performed under the circumstances.

'I feel more proud of them because we showed some real quality today. We caused Tottenham numerous problems and, to be honest with you, at the end of it you're thinking we could maybe win the game.

'The second half, the way the game was going, I felt a goal was coming. I felt we had a real dominance in the second half. You've got someone on the pitch there in Ade (Lookman) who carves those chances out of nothing. Cavaleiro puts it in the back of the net. And then after that, some big chances to be fair. I'm very pleased.

'Big games coming up. Every game in this division is going to be massive for us. We understand that. We've come to a big club with top players who have done well. We had an identity about us. The squad today was the numbers we had.

'If there's one thing you do need (to avoid relegation) first and foremost it's spirit. That's something we're drumming in every day. You also need quality to stay in this division, and we showed that in abundance.'