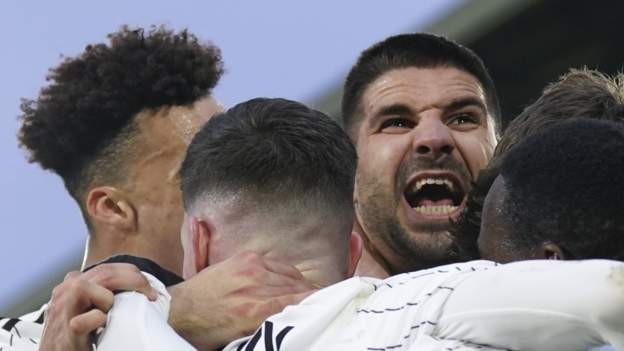 Aleksandar Mitrovic stuck a first-half hat-trick as Fulham hit Bristol City for six to return to the top of the Championship.

The Serbian now has 27 goals this season and his treble came in an enthralling opening 45 minutes that saw the Robins twice take the lead.

Antoine Semenyo scored either side of Mitrovic's first before Neeskens Kebano levelled and Fabio Carvalho put the hosts in front after 36 minutes.

Mitrovic completed his hat-trick in first-half injury time and Kebano made it six just before the hour to complete a resounding win.

The game kicked off 15 minutes late due to a power failure at Craven Cottage and the visitors caught the Cottagers cold when Semenyo hit a powerful shot past Marek Rodak after seven minutes.

The hosts hit back on 21 minutes when Mitrovic headed in Tom Cairney's floated cross but the recalled Semenyo burst forward from halfway on the counter attack to fire the Robins back in front.

The lead lasted barely a minute as Kebano levelled with the next attack of the game, heading past Max O'Leary in the Robins goal.

Marco Silva's men went in front for the first time after 36 minutes though a wonderful individual effort from Carvalho, who drove at the defence before curling into the far corner to make it 3-2.

Mitrovic headed in a Cairney corner four minutes later to make it 4-2 and completed his hat-trick in first-half injury time, firing into the top corner to send the Cottagers into half-time 5-2 up after a breathless opening 45 minutes.

Kebano grabbed his second to make it six after 57 minutes, pulling Tosin Adarabioyo's ball out of the air with style before rifling home from a tight angle.

Fulham eased off the accelerator in the remaining half hour and moved to the summit of the Championship, replacing Bournemouth, who were defeated by Luton earlier in the day.

Andy King (Bristol City) wins a free kick in the defensive half.

Antonee Robinson (Fulham) wins a free kick in the defensive half.

Harry Wilson (Fulham) wins a free kick in the defensive half.

Bobby De Cordova-Reid (Fulham) wins a free kick in the defensive half.

Attempt missed. Harry Wilson (Fulham) left footed shot from the right side of the box misses to the left. Assisted by Aleksandar Mitrovic.

Max O'Leary (Bristol City) wins a free kick in the defensive half.