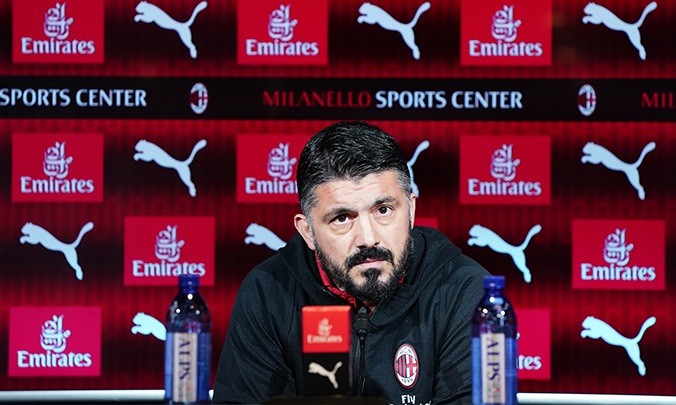 STADIO SAN SIRO (MILAN) – Gennaro Gattuso claimed he would love to carry on at AC Milan even if the Rossoneri don’t manage to reach the Champions League, after his team beat Frosinone 2-0 in Serie A.

Gattuso praised his players for the job done so far this season, and explained he believes he is a good coach that can still improve.

“I want to continue doing this job, and would love to continue here,” Gattuso told the press after the game.

“There’s been a lot of talking [by the media] over the past few months, ever since last July people were saying I was on the verge of leaving. “Those who have to judge me, will judge me. I think we did what we had to do and we did a good job – it’s thanks to the players.

“We managed to obtain some good results, like getting to the Coppa Italia semi-final.

“I think I am not bad, but have to improve. I feel I’m a good coach, and I’m not being arrogant. I would love to continue doing this job here.

“It’s a very different job compared to being a player, and I’m still learning.

“The fans have been on my side, on the team’s side, and I want to thank them.

“That Donnarumma penalty is emblematic of the season – we’ve had to be hit hard to get a reaction. Then we did well. “I am happy to say we’re in the Europa League, but of course our aim is the Champions League. We can be happy about being ahead of Lazio and Roma.

“Obviously, we have some regrets, when we dropped points we shouldn’t have dropped, but overall we have done well.”

San Siro bid farewell to Ignazio Abate, who will leave the club at the end of the season after 10 years with the Rossoneri, and Gattuso praised the defender.

“Abate and all those who are leaving in the summer should be praised,” Gattuso said.

“He was one of the last ones from the changing room when I was still a player, and he helped me a lot with these players, as he knew me already.

“He showed that in life one can always improve, as he has improved a lot and he will do well wherever he goes now.”