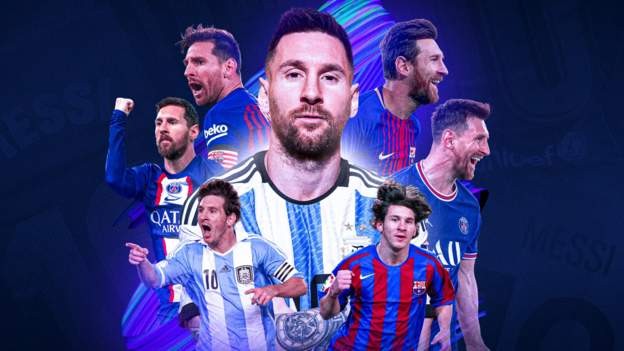 It just had to be him.

On his 1,000th appearance in professional football and his 100th game as Argentina captain, Lionel Messi stepped up again to keep his country's World Cup dream alive.

In his fifth World Cup, the 'magician' finally scored his first ever World Cup knockout goal as Argentina took another step to ending their 36-year wait for World Cup glory with a 2-1 second-round win against Australia.

After a nervy opening half-hour, Messi intervened to open the scoring and from there it was mostly plain sailing at an absolutely bouncing Ahmad bin Ali Stadium - until a late goal from the gallant Australians gave Argentina one almighty scare.

The Argentines now face a mouth-watering quarter-final against the Dutch with the hopes of a nation once again inevitably resting on their number 10, who is now the tournament's joint-top scorer with three goals.

Messi, who scored his 789th career goal, said: "I am happy for taking another step forward, achieving another objective. It was a very strong and difficult match."

Former England defender Rio Ferdinand said on BBC One: "The best individual performance from a player at this World Cup. It was almost god-like. I've not seen anything like this.

"How is he doing this? He is embarrassing players with his head up. He's taking people on and is able to see the whole pitch, where people are. He is phenomenal."

Fans in awe of Messi

It's the Argentina song that has gone viral back home.

The players have been videoed chanting it and it was those lyrics - translated as 'Boys, now we got excited again' - that were on the lips of supporters before, during and after the game.

Albiceleste faithful were bouncing on the metro and in the stands as they sang it on repeat and they witnessed a masterclass from 35-year-old Messi.

Sharp intakes of breath echoed around Ahmad bin Ali every time the little left-footer got his famous boot on the ball and he rocked the stadium with a delightful opener.

There was only one outcome when the ball dropped to him in the box, caressing a nerveless finish into the far corner to set Argentina on their way.

Fans were left chanting "Messi, Messi, Messi" at the final whistle and he joined his team-mates in jumping up and down in front of their adoring following long after the end.

Messi said: "These are amazing feelings, I am really happy to share their beautiful moment with the fans. I know how much effort they have put into coming here and I know the whole of Argentina wants to be here. The bonds, the union we have is something beautiful.

Former England captain Alan Shearer said on BBC One: "We're so lucky to be in this stadium to watch him. What a performance from him, we've talked about his ability, the hunger and desire.

"The ability to run with the ball which attracts so many players, allowing him to free up his team-mates.

"The way Messi works that space, the way he carries the ball when there is much going on around him. He's got everything.

Messi's goal was remarkably his first in the knockout stage of a World Cup but his total of nine is just one shy of Gabriel Batistuta's record for Argentina.

Against Australia, he completed 90% of his passes, created four chances and had nine touches in the opposition area.

Socceroos boss Graham Arnold added: "He is incredible. One of the greatest ever. We really worked hard not to be in awe of him but he is remarkable.

"Argentina should be so proud and happy they have players of that calibre."

Under Lionel Scaloni, Argentina are chasing a third world crown - the last coming in 1986 when Diego Maradona inspired them to lift the trophy.

Walking outside the stadium, it was a sea of Argentina number 10 shirts with the names of both Messi and Maradona printed on the backs.

BBC presenter and former England striker Gary Lineker played against Maradona in 1986, in a quarter-final made infamous by the Argentina star punching the ball into the net for the game's opening goal.

Lineker said: "It does remind me a bit of 1986 and the side with Maradona. Hard to play against, tough, enduring tough games and seeing their way through.

"They were difficult to beat and relied on the magic of Maradona. There are so many similarities. Maradona was at his peak, Messi is obviously coming to the end of his career. But can they do it?

"He does things I've not seen any other player except probably Maradona do. And to have two of those players, both left-footed and both from the same country, both small...

"Different eras, enjoy them both."

Former Argentina defender Pablo Zabaleta added: "We are still relying on Messi too much. The first half was not good enough and we needed to play a lot quicker.

"When Messi is on the ball, he is the only one who brings so much danger and a real threat going forward."

Messi became the oldest Argentine to score a World Cup knockout goal - taking the 'record' off Roberto Ayala.He is one of only six players to appear at five different World Cups.He is the second player to score at least three World Cup goals after his 35th birthday, after Roger Milla (five) for Cameroon.

What you said on social:

SuperSpoonerman: Messi's twilight years in football seem to be going a lot better than Ronaldo's

James: That had an air of a Sunday League game in which the one good player in it said; I'm going to score now and there's nothing you can do to stop me.

Beks: No footballer will ever get to Messi's level. NO ONE!!!