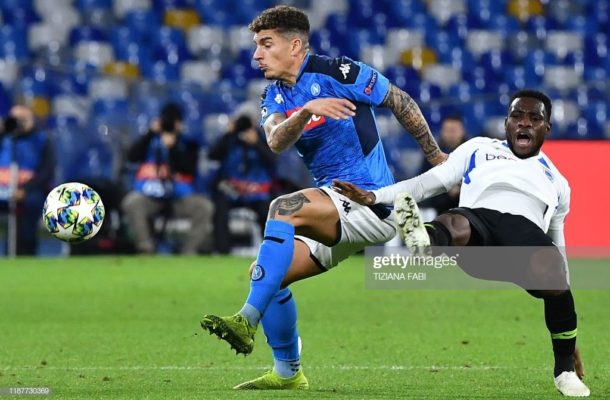 Ghana youth forward Joseph Paintsil earned praises from both Belgian and Italian tabloids following his scintillating performance for KRC Genk in the defeat against SS Napoli in the UEFA Champions League on Tuesday.

Paintsil made his first start for the Limburgers in Europe’s elite club competition in their 4-0 walloping at Napoli on Tuesday.

Despite the side’s disappointing display at the Estadio San Paolo, Paintsil was singled out by one of the country’s biggest tabloid Voetbalmagazine after being a thorn in the flesh of the Italian giants throughout the encounter.

The magazine wrote: "Only Joseph Paintsil showed a positive note, with actions like we didn't see them this season with the Belgian champion, but that is not enough to make a sufficient impression to already write his name correctly.

The biggest Italian portal, Gazzetta dello Sport joined in signing the Ghanaian praises after the match with a caption — 'Paintsic' ",

"His performance already shows what people at Genk have known for a long time: that you have to give a newcomer time to adjust and cannot judge after six months or a year. It makes Genk hope that next season, if everyone has found their place and is fully established, has a better team again than this year. "

Genk finished at the bottom of Group E with just one point in 6 matches.