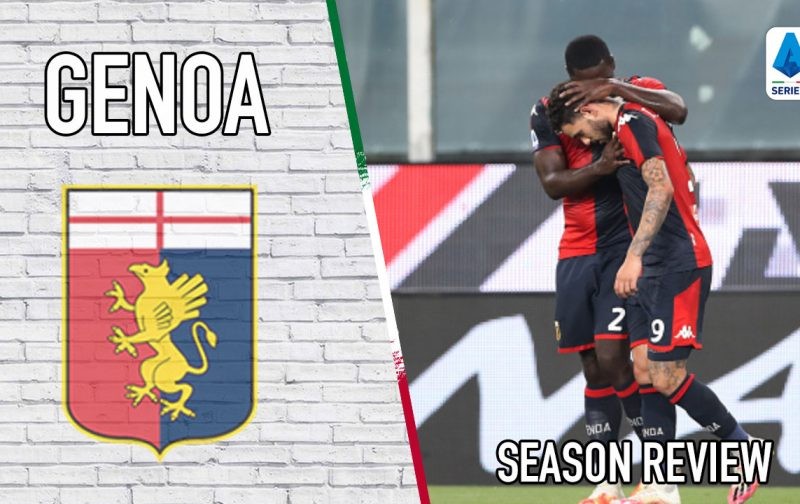 There was cause for Genoa supporters to celebrate when the 2019/20 season finally came to an end several months later than expected, however, escaping relegation on the final day of the campaign brought bigger sighs of relief than cries of ecstasy.

The Grifone have finished in the top half of the Serie A table just once during the last decade and are no stranger to a survival battle, but spending 10 months of the campaign 17th or lower, highlights how dreadful the season has been from start to finish.

Had it not been for the equally woeful performances of Brescia, SPAL, and to a lesser extent, Lecce this term, one of Italy’s oldest football clubs would be contemplating life struggling to lift themselves out of Serie B.

Player of the Season: Goran Pandev Unsurprisingly, the 37-year-old attacker made 16 of his 34 appearances in Serie A from the substitutes bench and contributed nine goals and three assists, but it was his quality and experience that became crucial in securing Genoa’s survival this season.

With vital goals during victories over Brescia, SPAL and AC Milan, it was the former Inter striker’s winners against Sassuolo and Cagliari at the beginning of 2020 for new coach Davide Nicola that provided the belief that relegation was not a foregone conclusion. The Genoa youth product may have only returned on loan from Juventus during the January transfer window, but his arrival appeared to provide the Rossoblu defence with a level of solidity that they had now shown during the first half of the campaign.

After collecting just 11 points from the first 17 games of the season, with the Italian international guarding the Genoa goal, the side amassed 28 from the next 19, as his calmness and assuredness allowed the team to go in search of the wins that would keep them in the top-flight.

When Aurelio Andreazzoli departed mid-October with the side in 19th, Thiago Motta lasted just 9 games in the Genoa hotseat, after achieving the same solitary victory as his predecessor, and in walked Davide Nicola to attempt to rescue the side from what looked like an increasingly likely relegation.

Whether or not owner Enrico Preziosi feels that 17th is enough to retain the 47-year-old for next season, there is no disputing that performances improved after Nicola took the reins – winning 28 points from a possible 57.

Without a win against crosstown rivals Sampdoria in four years, a victory against their neighbours in the Derby della Lanterna would have been a highlight regardless of how successful the overall campaign had been.

However, that the win came with just three Serie A fixtures left to play and extended their advantage over closest rival Lecce – whom they had defeated the previous round – was significant and will no doubt provide nightmares to the Blucerchiati fans, who missed the chance to help condemn Genoa. After failing to overcome relegation rivals Brescia and SPAL, a 1-0 loss to Sampdoria in December was followed by a 4-0 drubbing by Inter, that was as much a sign of the Nerazzurri’s Scudetto credentials as it was an indication that Genoa’s 12 year Serie A stay was coming to an end, if they could not turnaround their form when the league restarted after the Christmas break.