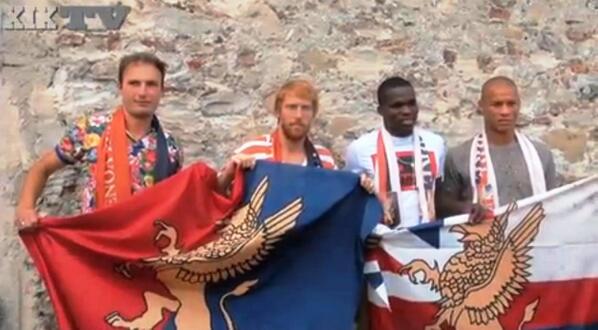 Isaac Cofie (second right) was unveiled by Genoa on Thursday.

Ghana midfielder Isaac Cofie was presented to the Genoa fans on Thursday after completing his return to his former club.

The 22-year-old was signed from Serie A side Chievo Verona after impressing in his first season there.

Cofie was transferred from a Ghana to Genoa in 2010 and made his Serie A debut in May that year as a second substitute against AS Bari due to his meteoric rise.

But was later loaned to Torino, Piacenza and Sassuolo before being sold to Chievo last summer.

"I am very happy to be back home. For three years around Italy are now finally back. I particularly thank club president Enrico Preziosi," Cofie said.

"Everywhere I've been I've learnt something and I also thank Mr Corini for the confidence you gave me at Chievo, darting in Serie A. Now with Fabio Liverani (coach) there will be more to learn. "

Cofie made 27 appearances and scored two goals which attracted his former employers to pay 3 million Euros for his services.

He was a member of the Ghana squad which beat Sudan and Lesotho last month in the 2014 FIFA World Cup double qualifiers.

Watch Isaac Cofie talk on his return to the Genoa after completing his move from Chievo Verona: