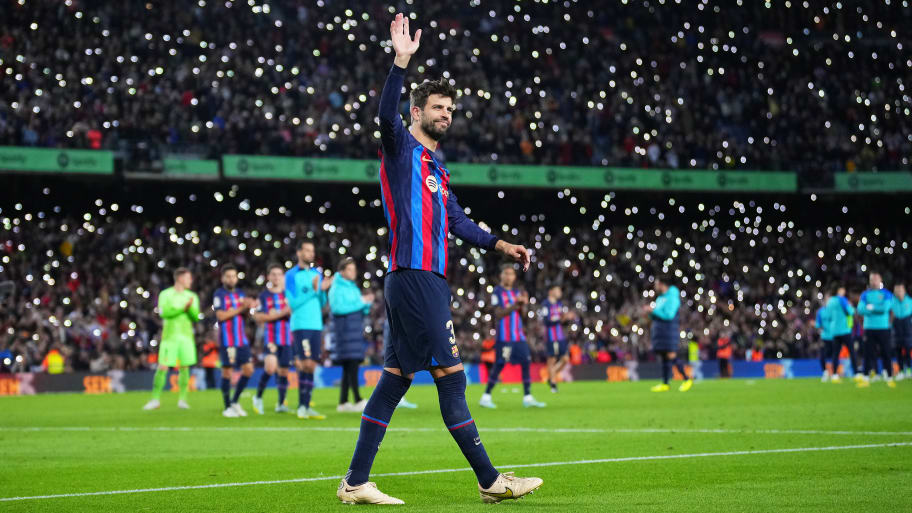 Saturday night saw Gerard Pique bow out as a Barcelona player, wearing the famous red and blue stripes for the final time in a pedestrian 2-0 win over Almeria.

Manager Xavi substituted the defender 10 minutes from time, giving him the chance to bid farewell to the Camp Nou faithful and hug his teammates.

The occasion clearly had an impact on Pique, who was in tears as he left the pitch.

The 35-year-old had recovered his composure by full-time, but broke down crying again as the 90,000 fans in the stadium paid tribute to one of the club's greatest legends of the modern era.

"First of all, thanks. To all my colleagues, the staff, the coaches. To all those who help us every day to make everything easier," Pique said as he delivered an emotional address to the crowd.

"Thanks to the board for all these years. In life, when you get older, sometimes to want is to let go.

"I love Barça so much. That's why I consider it's the right moment to go. A relationship of so much love, of so much passion, I think it was time to leave space, give us air, and I am convinced that that in the future I will be here again.

"This is not a farewell, I left years ago and then I came back. I was born here and I will die here."

A graduate of the club's La Masia academy, Pique left Barca for a brief spell at Manchester United before returning to the club in 2008.

He would go on to make 616 appearances for the club, scoring over 50 goals in the process and helping his side to three Champions League trophies.