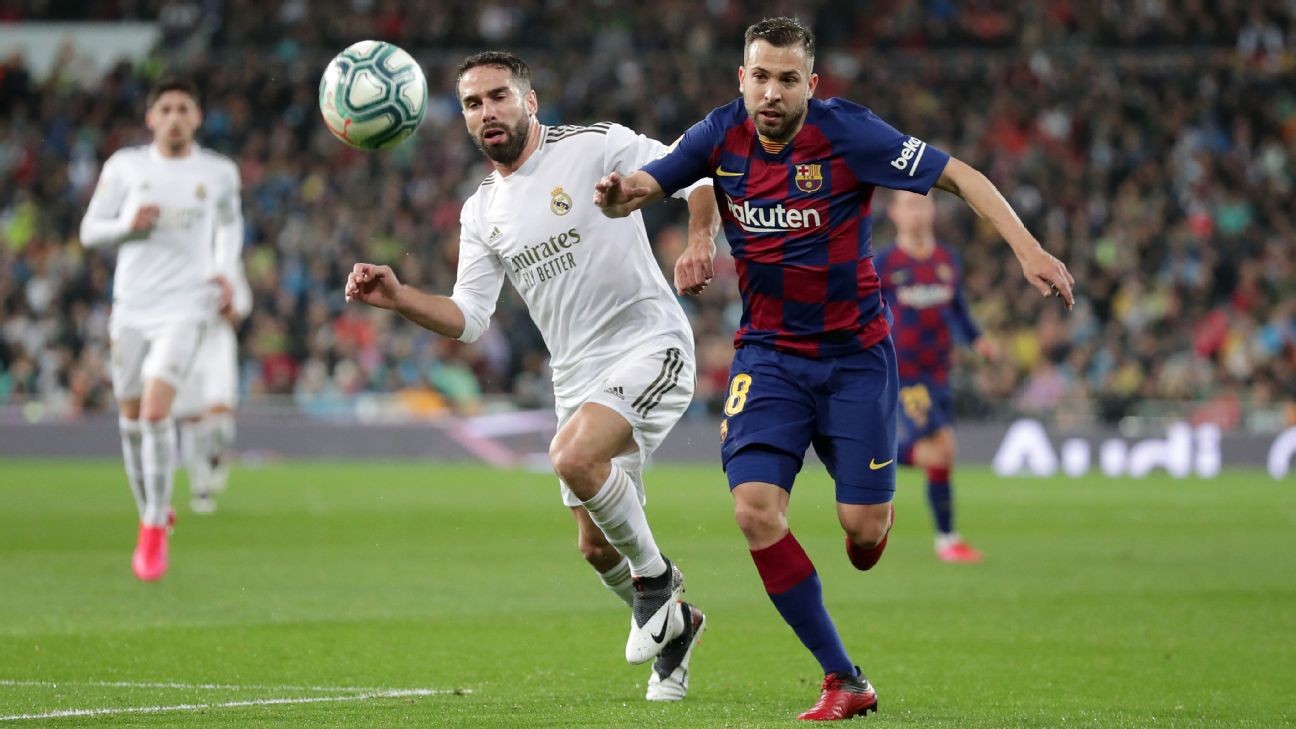 Gerard Pique claims the current Real Madrid side is one of the worst he has faced at the Santiago Bernabeu despite being part of a Barcelona team that fell to a 2-0 defeat in Sunday's Clasico.

Barca missed several first-half chances before second-half strikes from Vinicius Junior and substitute Mariano Diaz sealed a win which took Madrid back above the Catalans at the top of the table.

"We are upset," Pique told reporters. "We thought we could get a good result here because Madrid came into the game in bad shape. It was one of the worst Madrid sides I've faced at the Bernabeu in the first half.

"I don't say that as a criticism of them. We all have problems -- we aren't doing that well, either. But we missed an opportunity. We had control of the game and if we take advantage of a couple of our chances it leaves them with a mountain to claim."

Barca will look back at the openings spurned by Antoine Griezmann, Arthur Melo and Lionel Messi in the first 45 minutes. Griezmann fired over when well-placed and Arthur and Messi were both foiled by goalkeeper Thibaut Courtois.

Madrid, who were beaten by Manchester City in the Champions League in midweek, had failed to win any of their last three homes games in all competitions.

A victory for Barca would have extended their lead at La Liga's summit to five points. Instead, they end the weekend one point behind their Clasico rivals, although with 12 games still to go Pique points out everything is still to play for.

"We missed a chance to hurt them," he added. "We have to play better than in the second half. We lost balls and they grew in confidence and pinned us back. It feels like a missed opportunity, especially in the first half. We could have killed the game off.

"This result strengthens them, obviously. It's a morale boost. It knocks us but we're not sunk. We can still win La Liga if we do things well until the end of the season. We have to improve on our second-half display but there is still a long way to go."

"I would take playing as badly in the first half as he thinks we played if it meant winning every Clasico," he told reporters, resisting the urge to make similarly disparaging comments about Barca.

"Not at all," Ramos said when asked if this was one of the worst Barca sides in recent years. "I didn't think they were bad. I respect the way they play."

Following back-to-back defeats against City and Levante, Madrid coach Zinedine Zidane was happy to get back to winning ways as Los Blancos look to prevent the Blaugrana winning a third straight La Liga title.

"I think we deserved the win for everything we did, defensively and offensively" the Frencman said in a news conference.

"The first half was even. Our high press wasn't perfect but in the second half it was much better. They're three important points because it's been a difficult week."