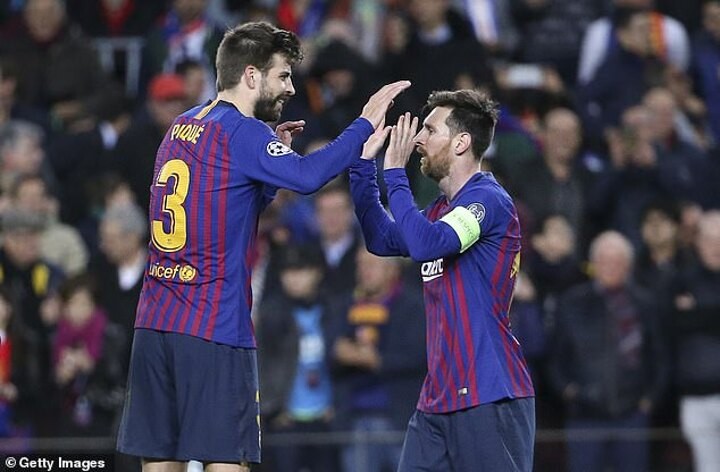 Gerard Pique has slammed Barcelona for the way they nearly let Lionel Messi leave this summer amid a social media scandal which has seen the LaLiga club allegedly attack its own players.

The club has been rocked by reports of the I3 Ventures scandal, which has allegedly seen Barcelona chief Jaume Masferrer lead a social media project alongside the LaLiga club to damage the reputations of figures such as Pique, Messi and the Argentinian star's wife.

Pique revealed he confronted Barcelona president Josep Maria Bartomeu about the scandal, but is still shocked to see figures such as Masferrer still working at the club.

Pique told La Vanguardia, as quoted by Marca: 'I don't want to get on badly with anyone but there have been moments (such as) the issue with social media.

'As a Barca player, I see that my club has spent money, money that they are now asking us to criticize. It's no longer only external people with a historical relationship with the club, but active players too, and that is outrageous.

'I asked him for explanations and what he (Bartomeu) told me was: "Gerard, I didn't know." And I believed it.

'Then you see that, in future actions, the person in charge of hiring these services is still working at the club.'

It has been a challenging few months for Barcelona, who saw talisman Messi shock the world by handing in a transfer request to the LaLiga club via burofax in August.

The Barcelona captain cited poor leadership from the Barcelona board as one of many reasons why he wanted to leave the Nou Camp.

While the Argentinian forward ultimately decided to stay at Barcelona, Spanish defender Pique - who came through the club's La Masia academy alongside Messi - revealed he had a conversation with the 33-year-old about his future.

Pique added: 'As president I would have acted differently. I asked Leo to stay on.

'I didn't have much dealings with him those days because I thought it was a very personal decision. I only said: "Leo, it's a year, and then new people will come."

'I asked myself: "How can it be that the best player in history, who we have had the incredible luck to enjoy, gets up one day and sends a burofax because he feels that they are not listening to him?" Everything is too shocking. What's going on?

'Leo deserves everything. The new stadium and its sponsor should have his name (on it).'

In an interview with Goal in September, Messi publicly criticised president Bartomeu over failed promises made about the team. The 57-year-old Barca chief has since announced he will not go for re-election in 2021.

Though Pique has himself been in his own off-the-pitch controversy recently as he signed a new contract at the club with a 50 per cent wage cut.

According to reports in Spain, Bartomeu wants to cut 25 per cent of the club's wage bill in his final few months as president in order to help Barcelona get through the financial crisis caused by the coronavirus pandemic.

Several Barcelona players signed a letter saying they will not negotiate with the current board over new contract, though Pique still went ahead and signed the new four-year deal until 2024.

Pique, who is one of the four captains at Barcelona, said the dressing room is still together and that there are no issues with his new contract.

The 33-year-old added: 'As captain I defended the interests of the team and I made the decision to sign it. And here we are a united dressing room.

'Then they said that the dressing room has been broken and I don't know why. They said it when many players were with their national teams. In a personal capacity, each player is free to accept the club's proposal voluntarily.

'The club communicated to me and other players that due to the pandemic the club will suffer a lot financially and in that situation Barca is worse than anyone.

'Barca has given me everything, so I put myself at their disposal. They told me that all the money I can give up this year will be collected in the future. We did the numbers and I proposed an amount.'

Pique first joined the club when he was 10 years old though left as a teenager to join Manchester United in 2004.

After four years in the Premier League, the defender rejoined Barcelona in 2008 and is closing in on 550 appearances for the Spanish club.

Pique has won eight LaLiga titles and three Champions League trophies during his career with the Catalans.