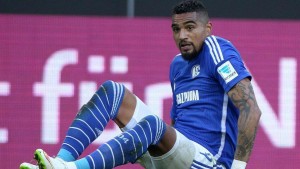 Kevin-Prince Boateng has not been in good form

German side Schalke are determined to offer their flop Ghana international midfielder Kevin-Prince Boateng to seeking clubs for cut-down price at the end of the season in a bid to cut massive cost of paying him an annual salary of 8m Euros.

Schalke chief Horst Heldt is willing to accept their losses by accepting between 4 to 5 million Euros as the transfer fee from interested clubs to keep the financial loss to a minimum.

In the summer of 2013, the Ghana international cost 10m Euros from AC Milan so they are willing to take a loss of 5m Euros to allow Boateng to leave, reports the respected weekly football magazine 'Kicker'.

After the derby disgrace against Dortmund, coach Roberto Di Matteo is already practicing new systems without Boateng as he formed his 3-5-2 formation with the Ghanaian a central part which was unsuccessful with three defeats in the last four competitive games.

But the Italian coach is now using a more attacking formation of 4-2-3-1 or 4 -3-3 without the Ghanaian in his plans.

Schalke coach Roberto di Matteo and his management are planning next season without the controversial star player.

Boateng is also not averse to the change, according to the report, which will quicken the pace of severing of the contract between the two parties.

When Boateng joined Schalke two seasons ago from AC Milan he was regarded as the great hope for the German side who were seeking to improve their profile.

He was able to meet the expectations especially in his first season but this term has been disastrous for the Ghana international which has resulted in the decision to let him leave.

He has been injured for most of this season thus making only 13 appearances in the Bundesliga and has not scored a goal for the club this season.