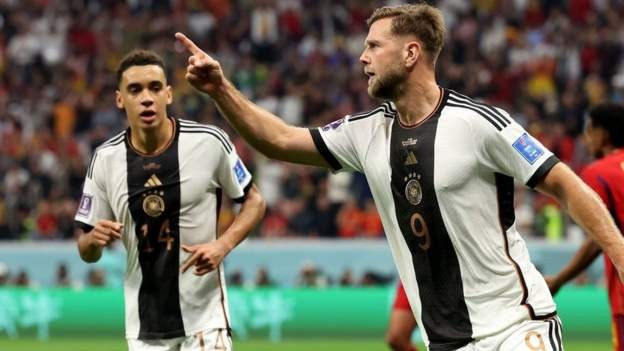 Journeyman striker Niclas Fullkrug became Germany's unlikely saviour on Sunday - and as his entertaining Wikipedia page suggests, his rise to the global stage has been an eventful one.

Fullkrug's lengthy backstory includes a love of the Rocky theme tune, an explanation of his nickname 'Gap', and an alarming story from his youth days.

The forward was brought on late against Spain and rescued a point for Germany, for whom elimination from the group stages at a second successive World Cup was beginning to look a real prospect.

Fullkrug's route to Germany World Cup hero is a long and an unlikely one. Just 12 months ago, he was playing in Germany's second division, so hardly in contention for the national team.

But he scored 19 goals in the 2021-22 season to help Werder Bremen secure promotion and already has 10 goals in the top flight this season.

That brought him to the attention of coach Hansi Flick and, aged 29, he became the oldest outfield player for 20 years to make his Germany debut when he featured against Oman in their only warm-up game before the World Cup.

Bayern Munich striker Thomas Muller, the player he replaced on Sunday, said afterwards: "It was outstanding the way Fullkrug nailed it like that. It's a great story."

Perhaps just as incredible as any of this, however, is Fullkrug's Wikipedia page.

"Fullkrug's nickname is 'Lucke' (German for 'gap') because of his front teeth. He has a wife called Lisa. He listens to Survivor's 'Eye of the Tiger' for motivation.

"Following an accident at Werder Bremen's training ground he once ended up hospitalised with the tooth of his team-mate wedged in his forehead."

And it all seems to be true.

Fullkrug once toldexternal-link the Hannover 96 website that 'Eye of The Tiger' was "the most motivational song I ever heard".

Meanwhile his nickname came via former team-mate Marko Arnautovic when he played alongside the former West Ham United and Stoke City striker at Werder Bremen.

And while playing for the German club's youth academy, an accidental collision of heads with a team-mate ended with both having to go to hospital and medics having to remove a tooth from Fullkrug's forehead.

According to the Bundesliga's websiteexternal-link he said it was "very dangerous because of a threat of infection due to the bacteria".

German daily newspaper Die Welt couldn't resist riffing on his nickname, stating that Fullkrugexternal-link "perfectly filled the gap that existed up front in the German attack".

How much he features in Flick's plans henceforth remains to be seen, but Fullkrug and his backstory have provided a fun backdrop to Germany's laboured start to their World Cup.

Powerplay: The House of Sepp Blatter: How did football become synonymous with scandal?From Sex Education to SAS Rogue Heroes: Connor Swindells chats about his varied career