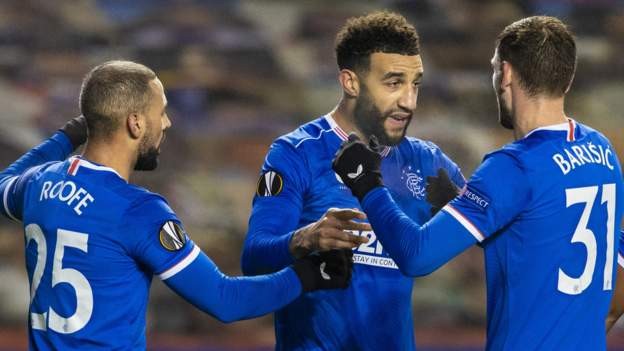 Rangers "looked like a proper team" in the second half as they beat Standard Liege to reach the Europa League last 32, says manager Steven Gerrard.

Gerrard's men dug in as they fought back twice to claim a 3-2 victory and reach the knockout rounds for the second successive season.

The Ibrox manager praised the mentality of his players as they extended their unbeaten run to 24 games.

"They caused us real problems during the first half and we had to tweak certain things at half-time. I thought our second-half performance was much better.

"I've been delighted with that attitude all season. All the tests we've had we've stood up."

Next week's trip to Lech Poznan could afford Gerrard the luxury of resting players, as regardless of the result Rangers will emerge from Group D.

However, the Scottish Premiership side have the chance to top the section, should they match Benfica's result, with the Portuguese team travelling to Belgium to face Standard.

"It's fantastic to be sitting here now and the aim will be to win the group," says Gerrard. "But I also have to think about the big picture and make the right decisions for the domestic games too.

"I have to see how we recover this game and how we come through the Ross County game [on Sunday]."