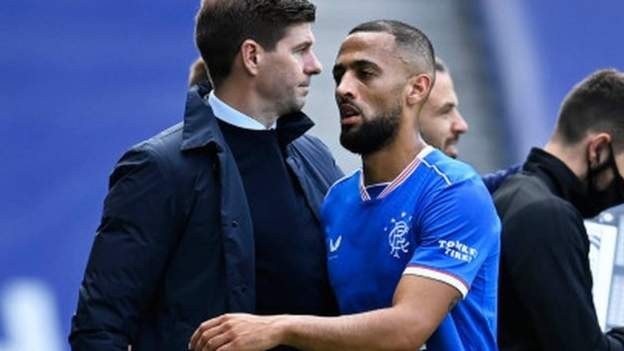 Strikers Cedric Itten and Kemar Roofe were both signed this summer

Steven Gerrard's recruitment at Rangers has been a "masterstroke", according to former manager Alex McLeish.

The Ibrox side are six points clear in the Scottish Premiership, ahead of reigning champions Celtic, who have a game in hand.

McLeish pointed to the additions Gerrard has made to the team - particularly up front - as potentially a key factor in the title race.

"For me, Stevie's recruitment has made a difference this season", he said.

"Two strikers in Cedric Itten, who we haven't seen a lot of yet, and Kemar Roofe, whose goal on Thursday was phenomenal.

Was Roofe's goal the best Gerrard has ever seen?Rangers go six clear with win over Livingston

"Last season, Alfredo Morelos was [sometimes] out, whether through injury or suspension, and Jermain Defoe can't go on forever. To have these two extra strikers was a bit of a masterstroke and I think it was needed to be honest."

Rangers are attempting to stop Celtic from winning a 10th consecutive league title this season.

McLeish, who won two league titles as manager of the Ibrox club, believes Gerrard's side are the more likely to succeed this season.

"I think Rangers are favourites, in current form," he added. "Anything can happen in a season, there are lots of games. Injuries can catch up, as we've seen with Neil Lennon and Celtic in recent weeks.

"But Gerrard has taken everything in his stride and not shouted from the rooftops about what he can do. He's doing it very quietly."